Wheel building is a mix of art and science. Accomplished bike mechanics pride themselves on making a crucial part of the bike that not only lasts for many years, but also looks and feels beautiful once it’s bolted to the bike. Wheel building is a skill that takes years to learn properly and a lifetime to master.

Thankfully, learning to true a wheel is much easier than building one from scratch. With today’s bikes almost universally using disc brakes, they don’t even have to be perfect anymore to work. In this article we tell you how to bring your wheels back to true and get you back out on the trails. While we can’t promise this advice will fix every taco-ed wheel, we can assure you that it will help in most cases, whether you’re in your home shop or out on the trails. 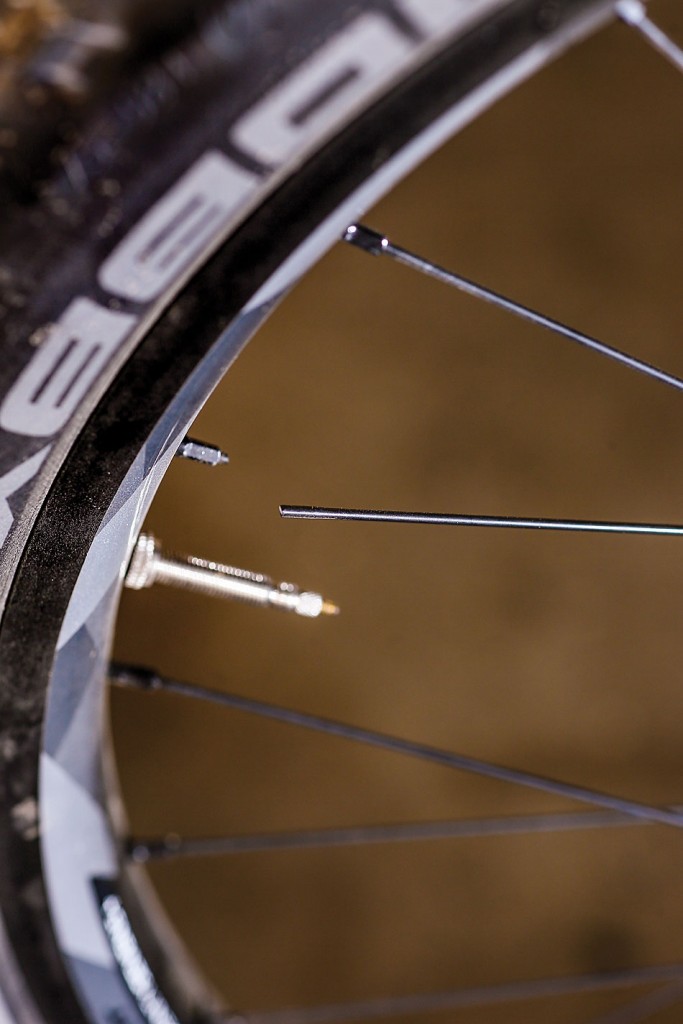 A broken spoke may seem like a ride- ending mechanical, but it’s typically not. With a 32-spoke wheel, you can easily limp home when this happens by relying on the other 31 spokes. Most often when spokes break, it happens at either the J-bend at the hub or at the threads, like this one. 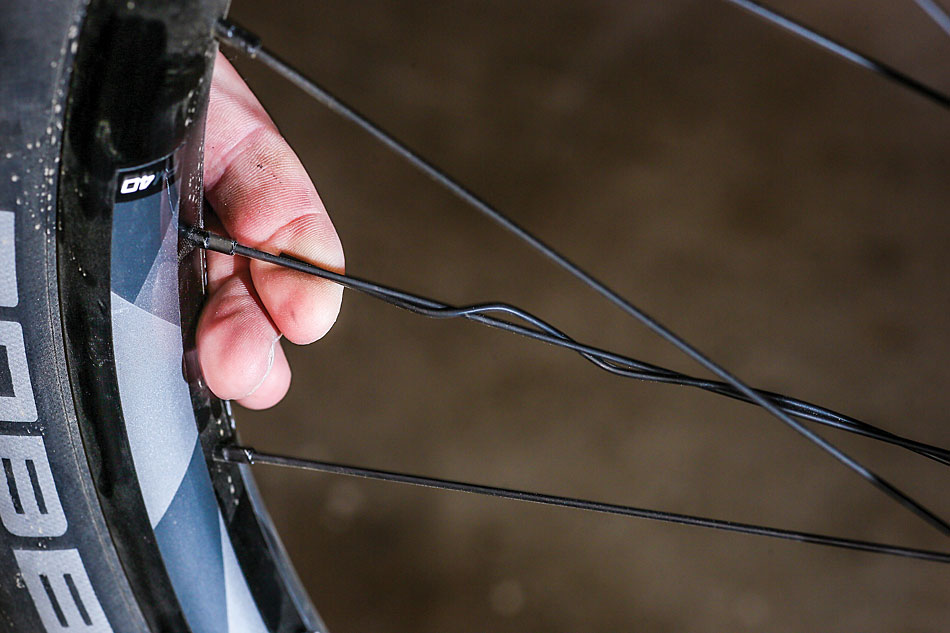 If you have a broken spoke out on the trail, don’t worry about trying to remove it. Instead, simply wind the broken spoke around one of the good ones to prevent it from flailing and pinging about as you limp home. While the wheel may be out of true, it will likely not be so far gone that you can’t ride the wheel. 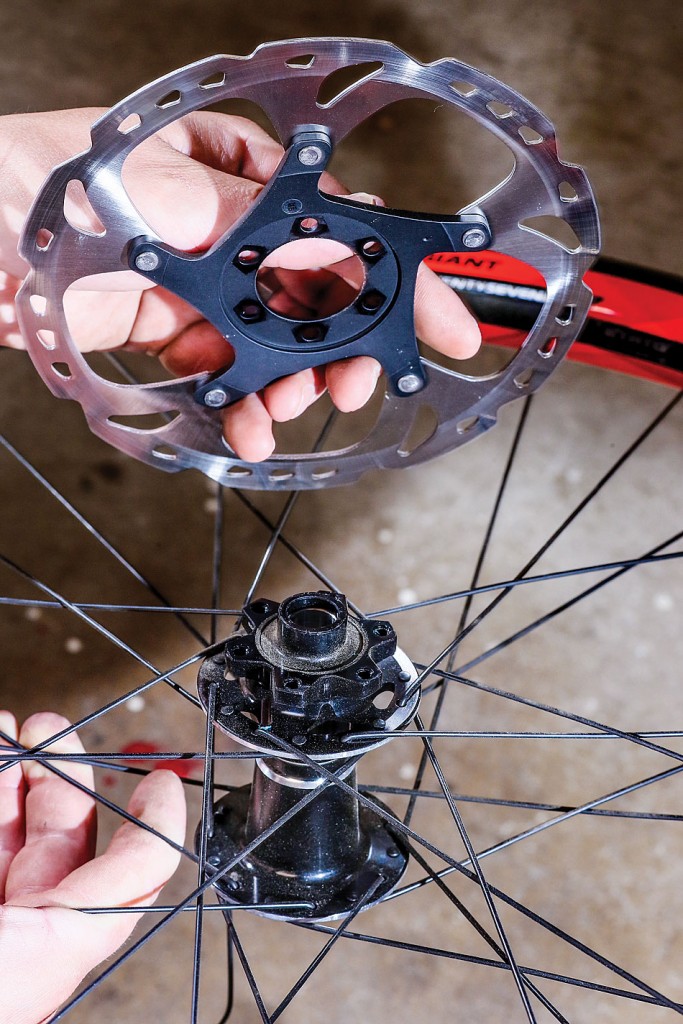 Once you’re home, you can begin the process to replace the spoke. (Keep in mind that if you’ve broken one spoke, the others are also probably fatigued and ready to break as well. If your wheel is more than a few years old, it may be better to simply replace the whole wheel rather than dealing with broken spokes on every ride.) Start by removing the brake rotors and, if it’s a rear wheel, remove the cassette. 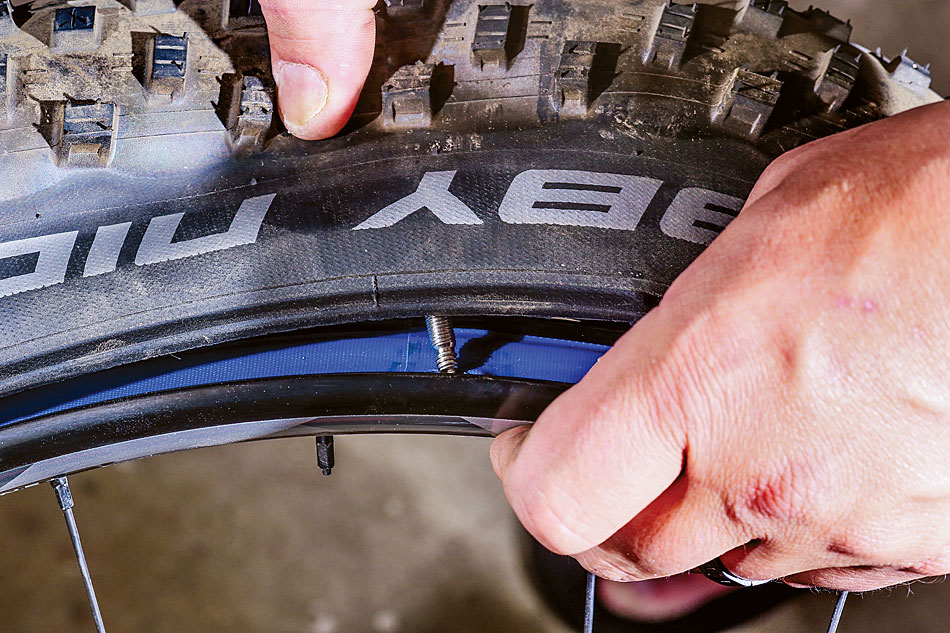 Remove the tire and tube and set them aside. If you’re not comfortable doing this step, you’re best taking the bike to the shop for the professionals to handle the issue rather than handling it yourself. 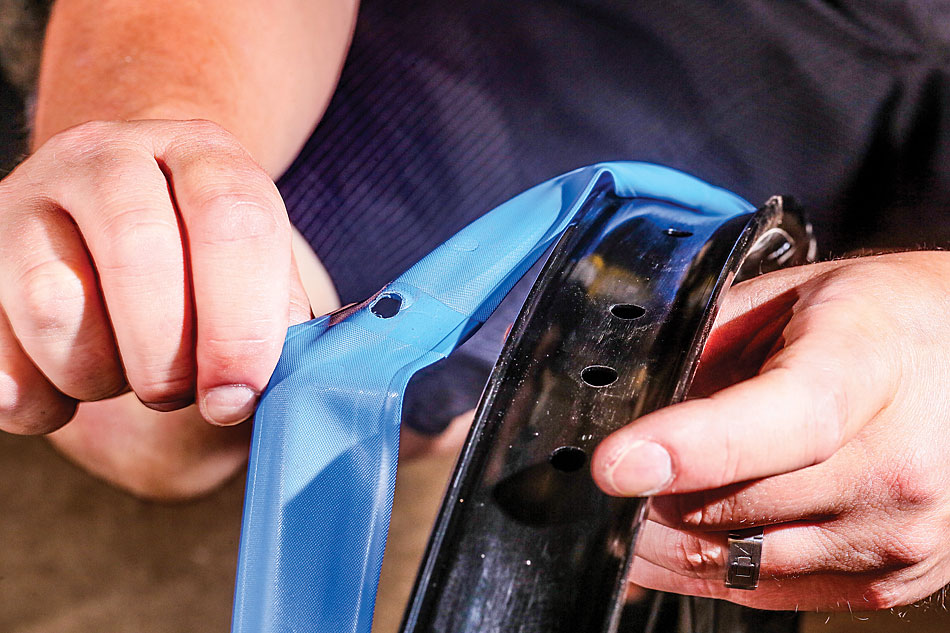 Remove the rim strip to access the spoke nipples through the rim. If you’re running a tubeless setup, this will likely require you to remove the rim tape, which is not reusable. Be sure you have an extra roll of tape to install if you need it. 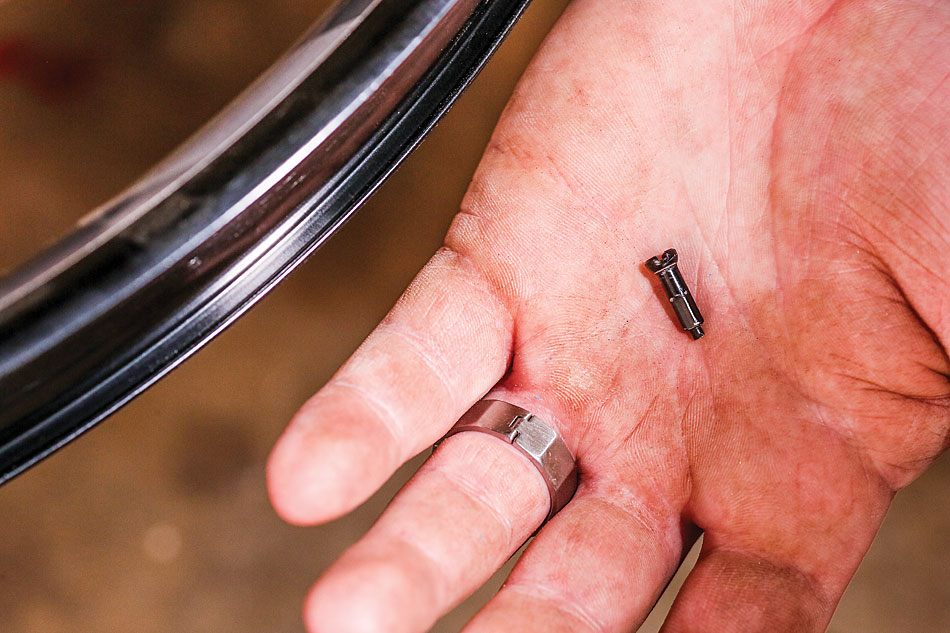 Remove the old nipple. These little buggers can fall into the rim after they break, and if you don’t remove them, they will cause a very annoying rattle. Be sure you remove the whole nipple before installing the new spoke. 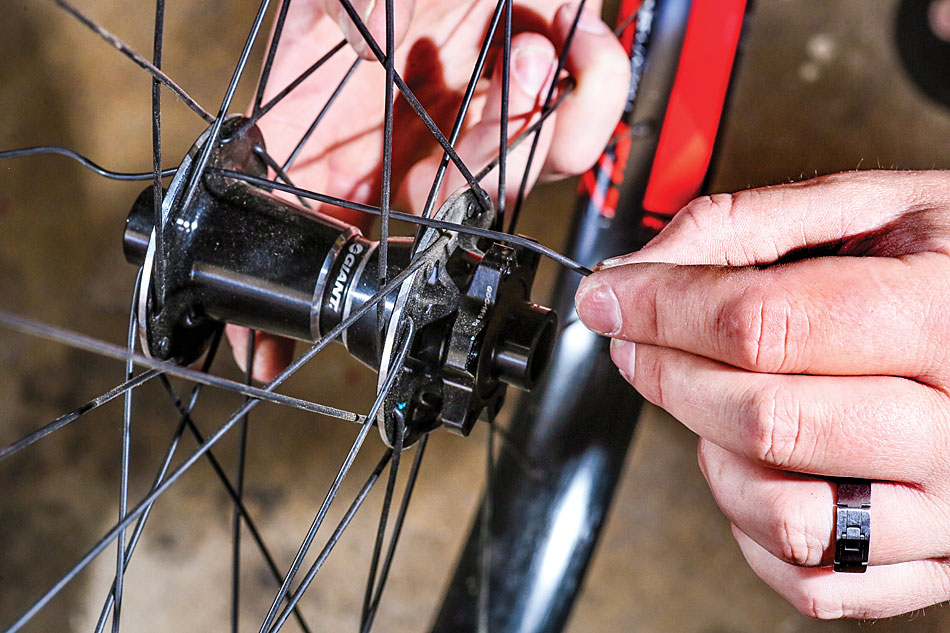 Untangle the broken spoke and remove it from the hub. Old, broken spokes can be sharpened and made into “spokey tools” for opening cable-housing ends and marking things like seatpost heights. 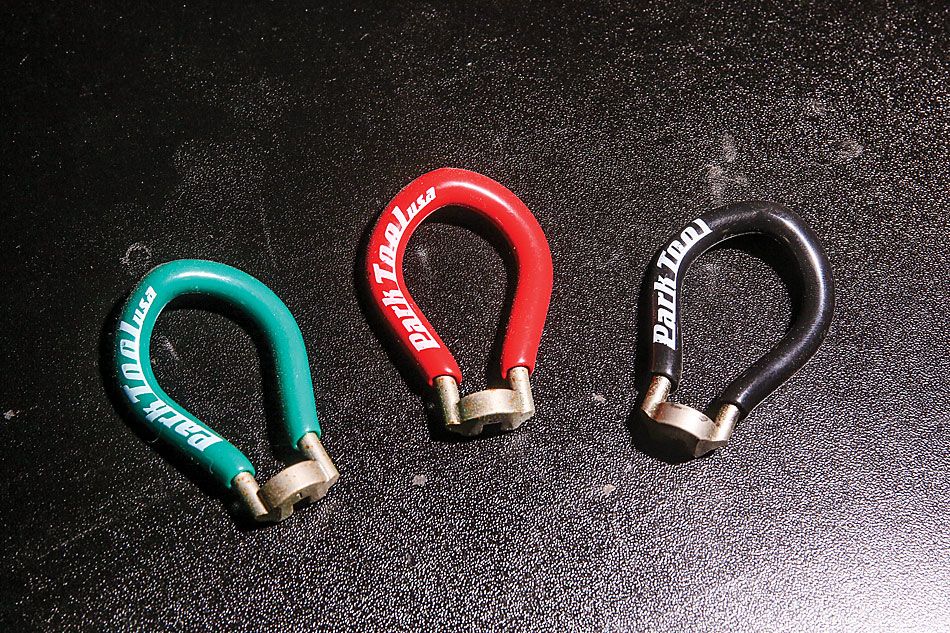 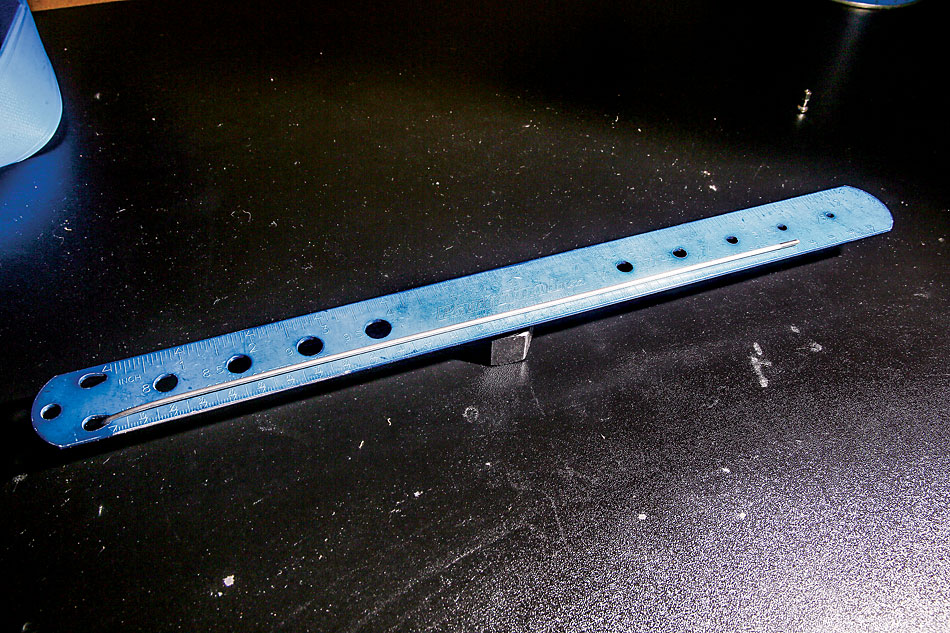 Park also makes a nifty spoke ruler that makes it very easy to measure spoke length. Our 27.5+ wheel required a 275-millimeter- long replacement spoke. Spokes are available in black and silver, but we’re using silver here to make it easier to see. 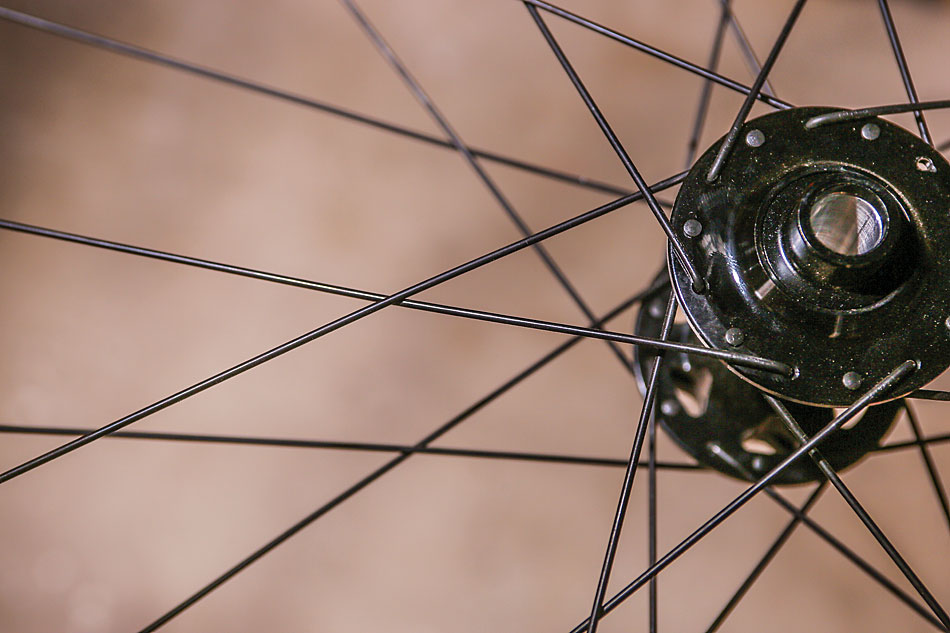 Spokes are also available in butted and straight-gauge versions. The butted ones are thinned out in the middle to make them lighter, but they are more expensive. You can easily tell if you have butted spokes by running your fingers across them to see if they have a bulge at the ends. 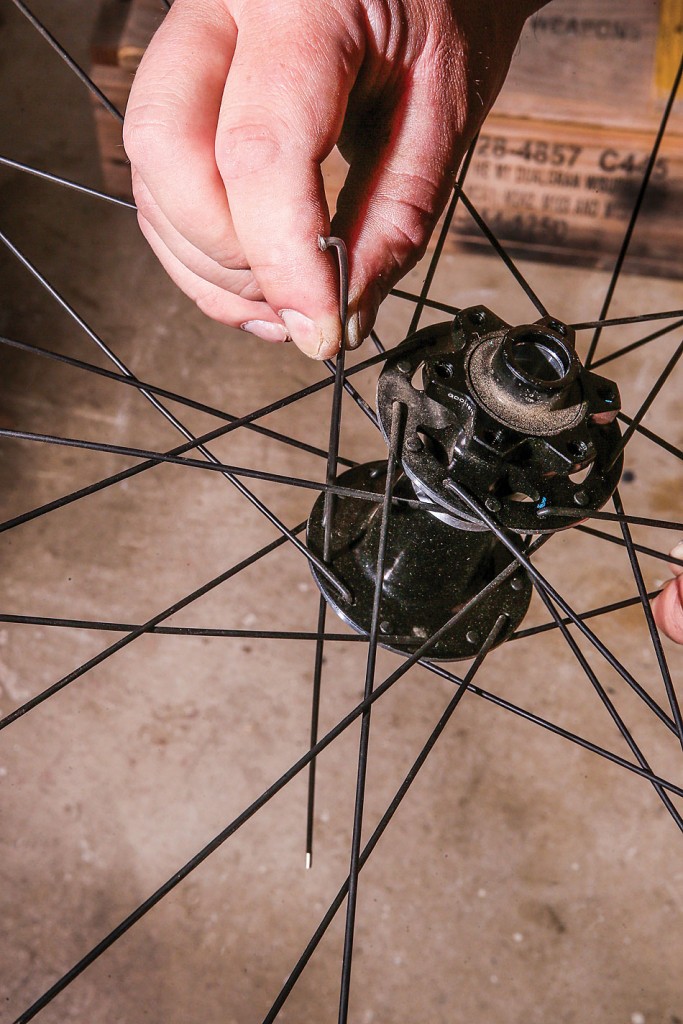 We’re ready to install the new spoke. Start by dropping the spoke into place like so. Be sure to match the pattern of the other spokes, which is always one spoke head facing in and the next one facing out. 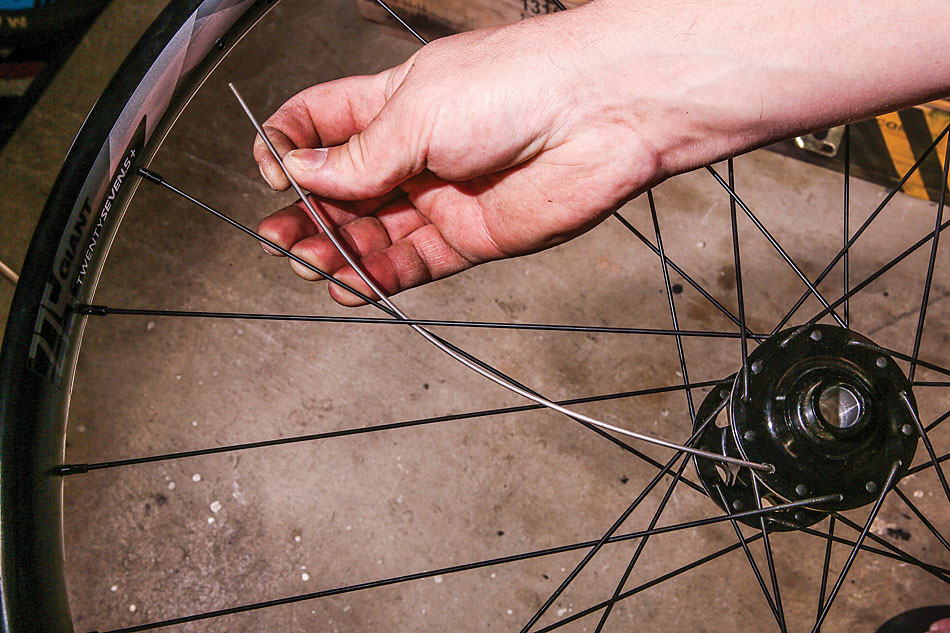 Now, follow the pattern of the rest of the spokes to lace the spoke into place. This is a three-cross wheel, meaning each spoke crosses three other spokes on the way to the rim. This wheel requires an “over, over, under” pattern, which is always the pattern for a standard three-cross wheel. 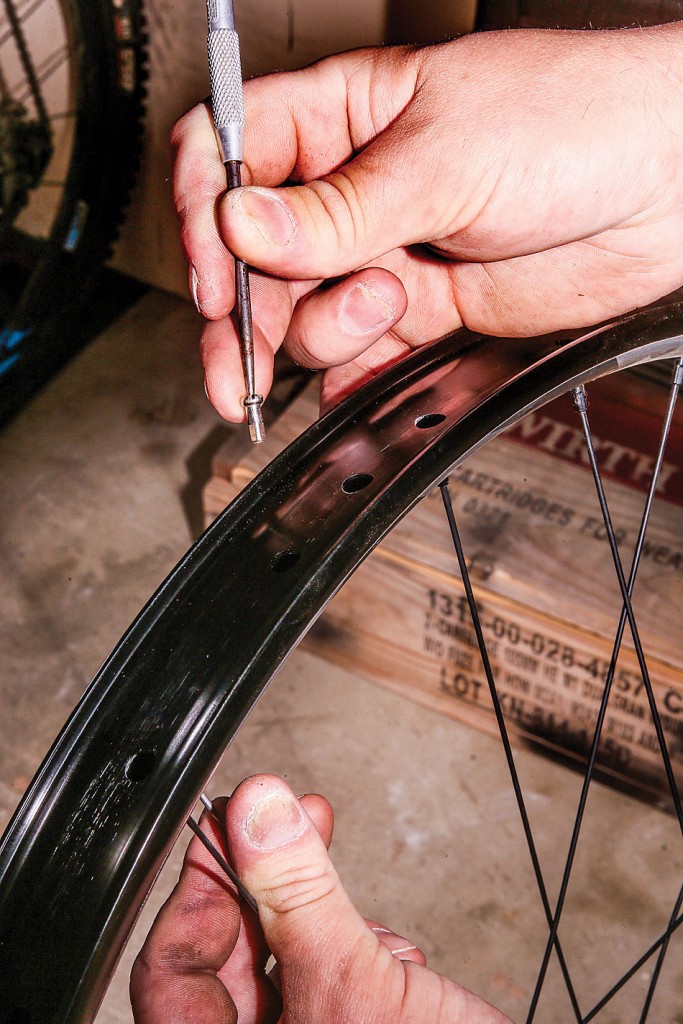 Next, we need to install the new spoke nipple. This can be tricky, as the small nipple can easily be lost in the rim if you’re not careful. We like to put the nipple on the end of a scriber like this to help guide it into place and hold it there. 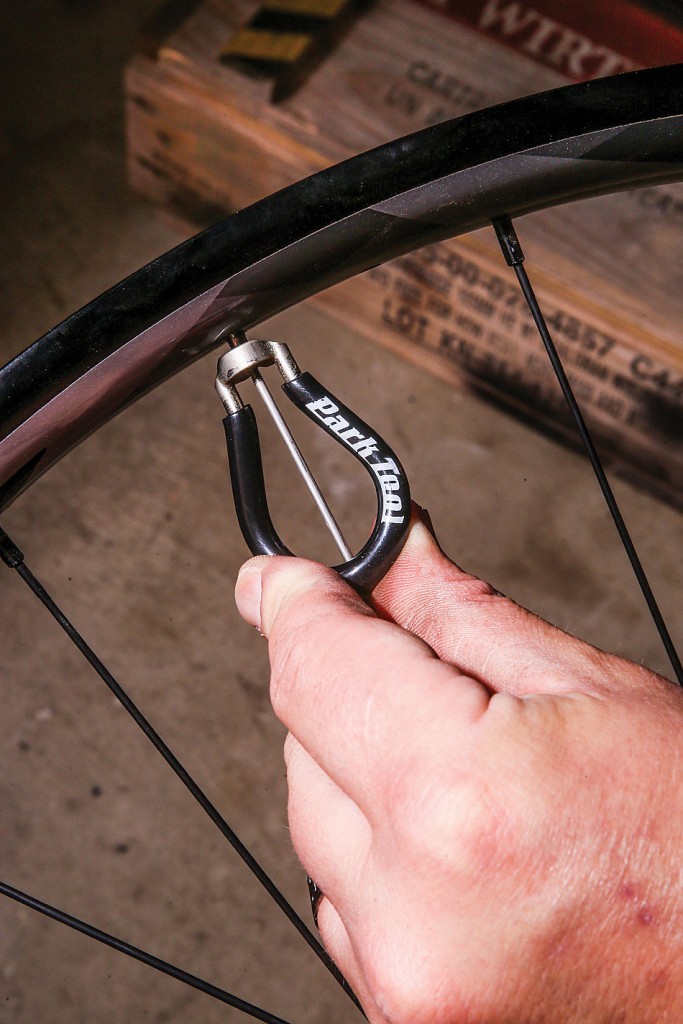 Once in place, begin to thread the nipple onto the spoke. The nipple works like a nut on a bolt, so it’s righty tighty, lefty-loosey. You should tighten the nipple until the spoke starts to have a slight bit of tension. If you’ve measured your spoke right, the nipple should nearly cover the threads
of the spoke as it snugs. 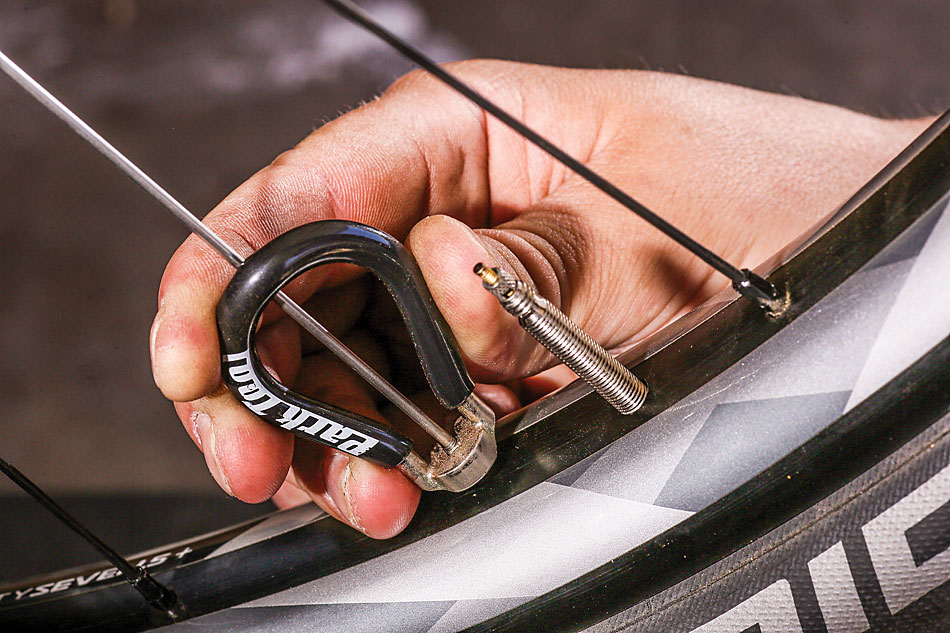 Be careful not to over-tension the spoke right away, as we will need to true the wheel. 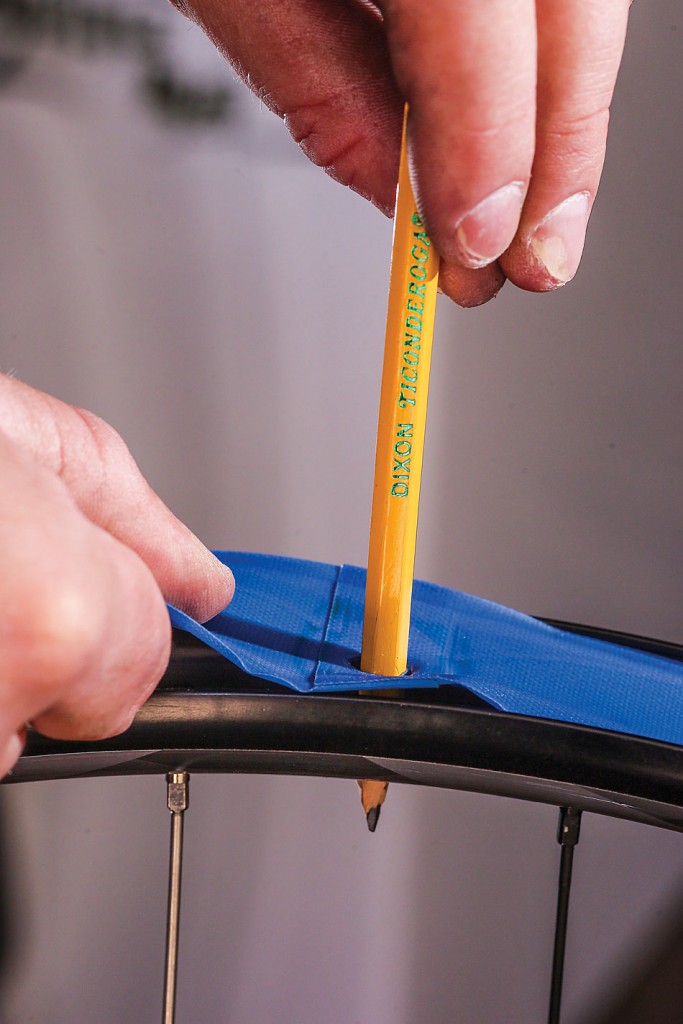 With the spoke installed, you can now reinstall the rim strip and tire if you wish. Some wheel-building fanatics insist on truing the wheel with the tire off for better precision, although this is not always necessary. When reinstalling the rim strip, it’s handy to use a pencil like so to keep the valve hole in place. 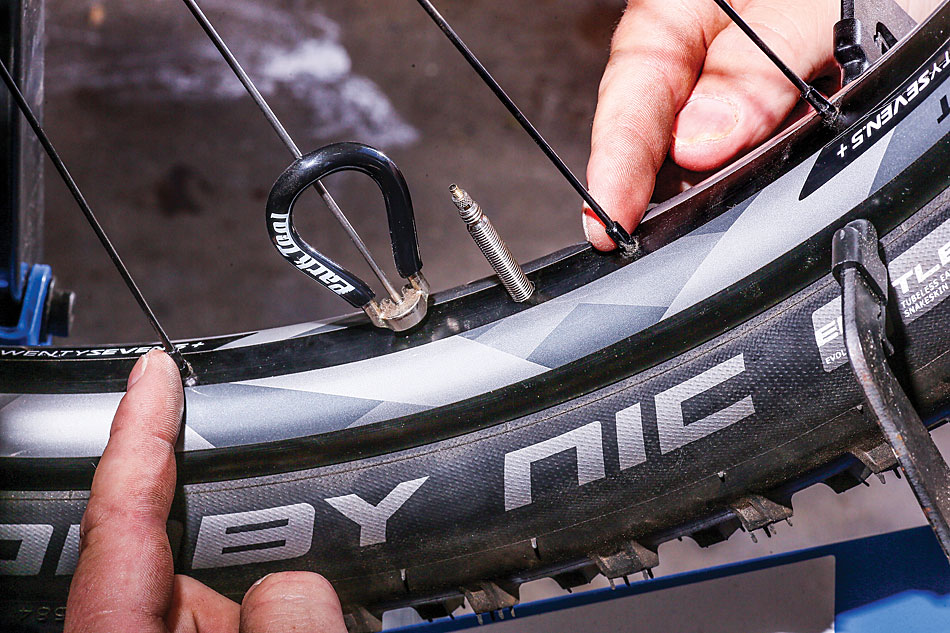 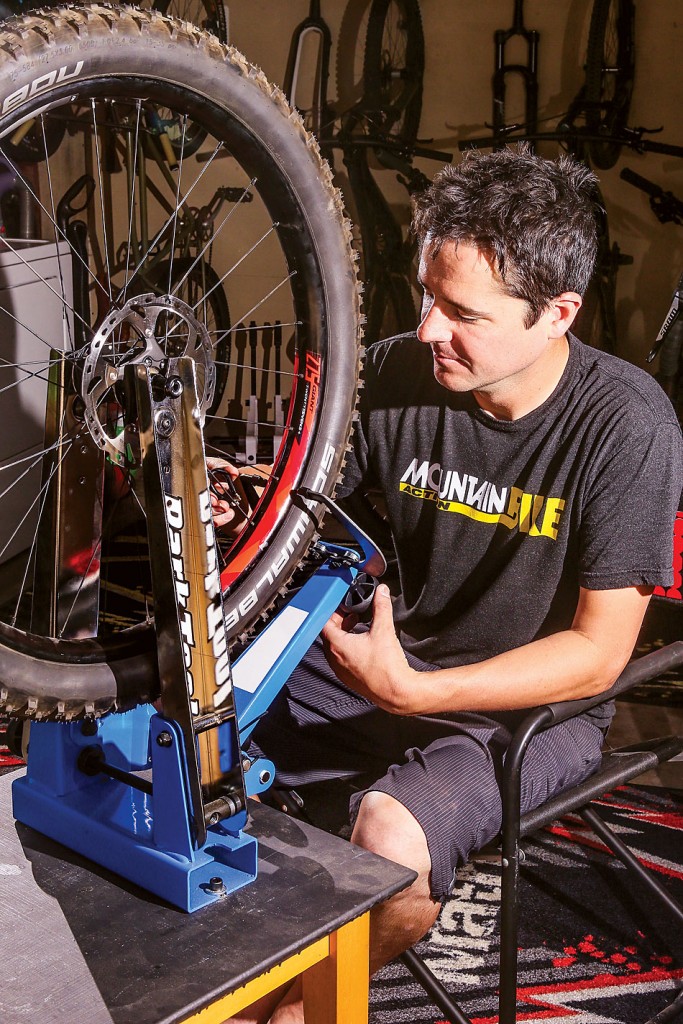 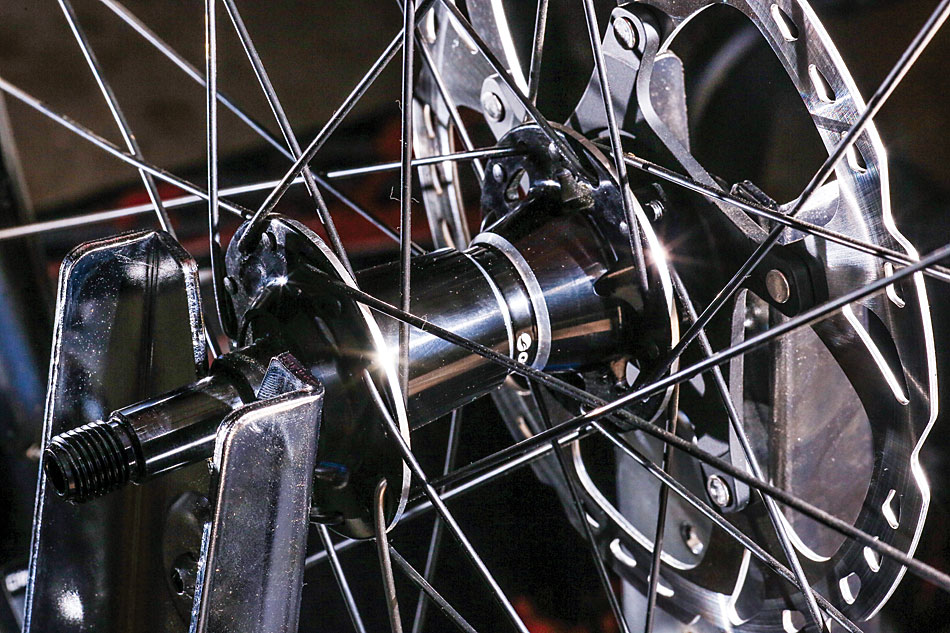 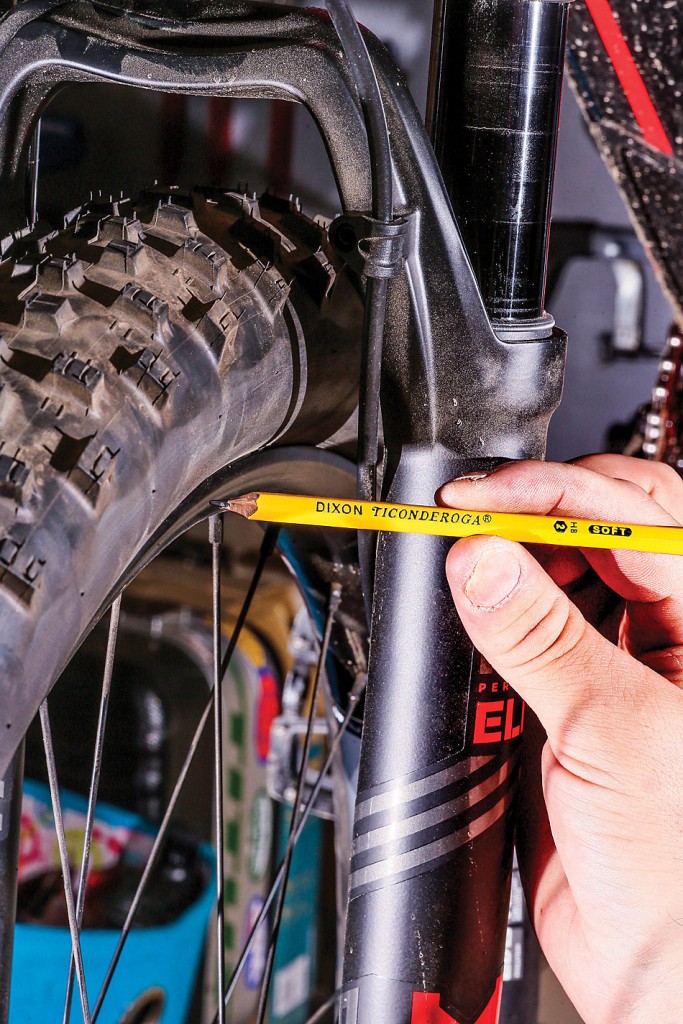 If you don’t have a fancy truing stand, don’t fret. You can do this same repair on the bike by holding a pencil like so with the wheel spinning. This will allow you to spot the trouble spots and still true the wheel, although not as precisely as you would be able to with the actual truing stand. With rim brakes being a thing of the past, having a perfectly true wheel is less important than it used to be. 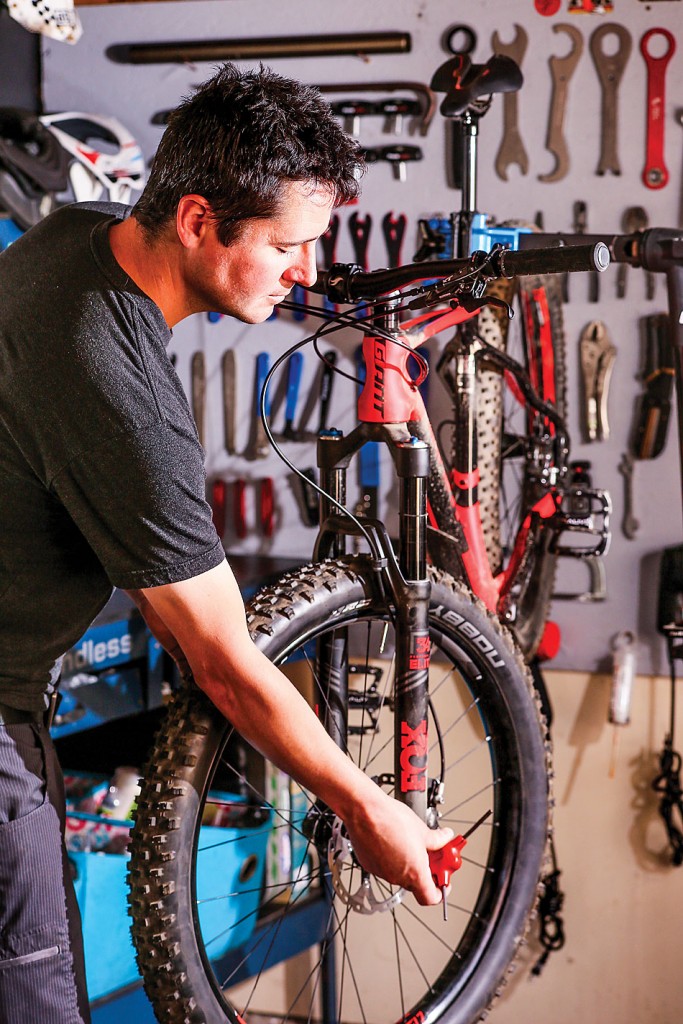 With the new spoke installed, bolt the wheel back on and go hit the trails!

JOIN US AT THE ELECTRIC BIKE EXPO