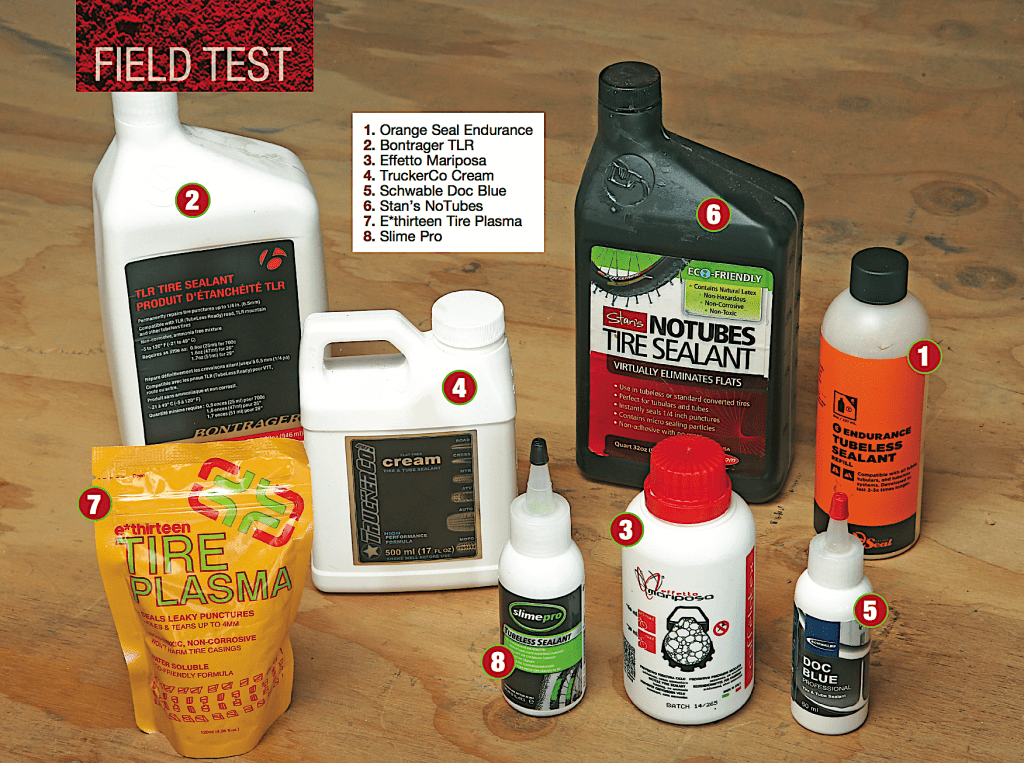 Riders love searching for new technology that will help make them faster. Unfortunately, many upgrades are expensive and offer only a slight performance gain. Thankfully, however, there are some inexpensive upgrades that can greatly increase your bike’s performance. Any bike shop will tell you that the easiest and least-expensive upgrade is to convert your bike to tubeless. A tubeless setup is essentially a bicycle rim and tire that no longer needs an inner tube to hold air. A liquid sealant is used instead of the tube to ensure the system is airtight and also acts as a safely net in case of a small puncture out on the trail. Today, there are numerous types of tire sealant to choose from, and it can be complicated to figure out which option is best for you. So, the EBA crew decided to do the legwork for you and put the most popular sealants to the test. Special thanks goes out to Ridefast and Arisun for supplying us with rims and tires so we could perform a fair and consistent test. 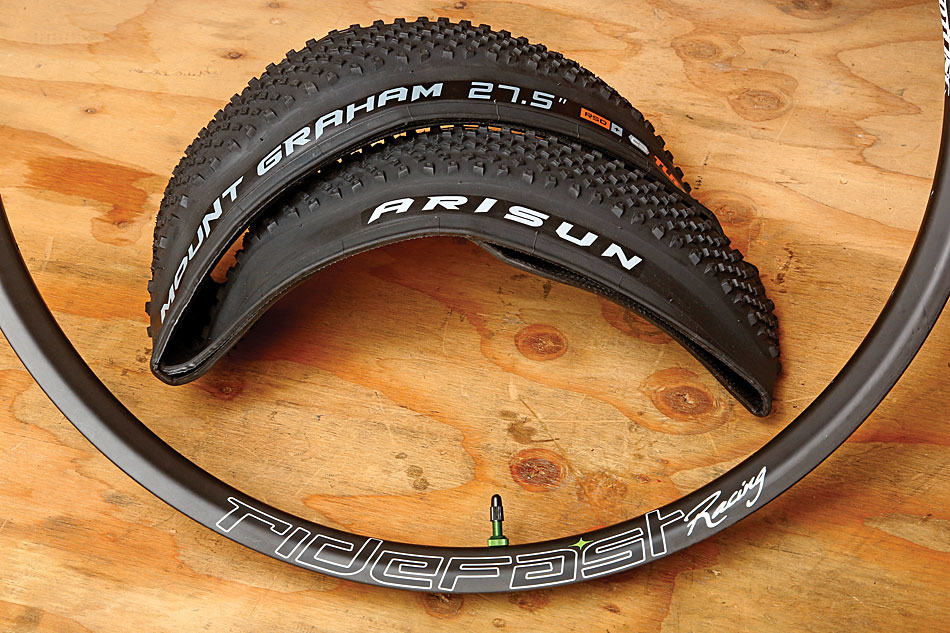 Matching sets: We would like to thank Arisun and Ridefast Racing for providing us with the rims and tires used in this test. All tires were harmed during our testing process. 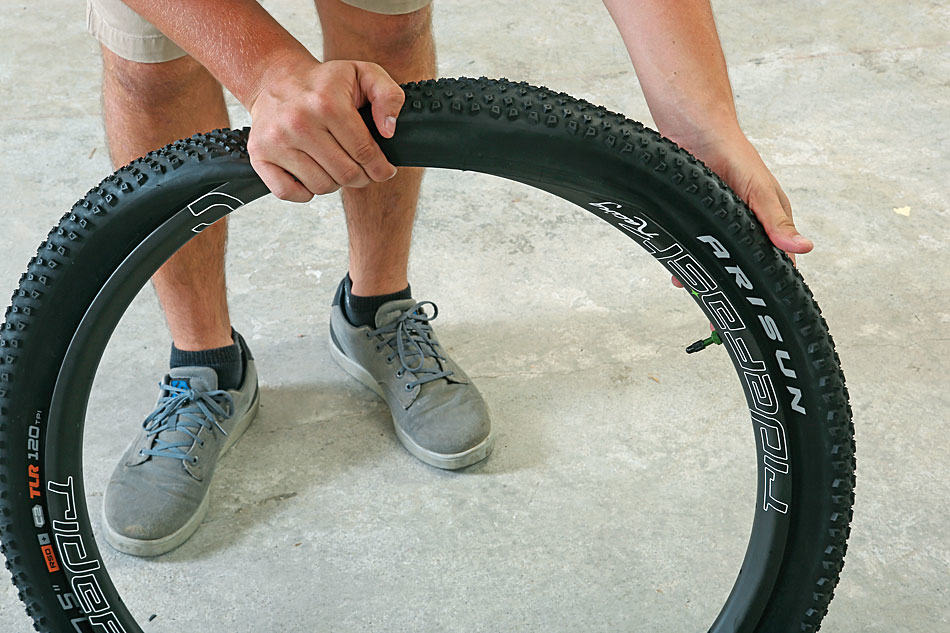 Set ’em up: The insides of our rims were wrapped with a special tape and a tubeless-ready valve was installed. The tires were then put on by hand, leaving just enough space exposed to pour in our tire sealant.

Stan’s tire sealant is one of the most popular sealants on the market. We’ve often heard riders refer to a generic tire sealant as Stan’s, because it really was the original high-performance sealant specifically formulated for bikes. It’s made with a low-viscosity liquid, so it can easily work its way around a tire, and it uses sealing crystals to patch up punctures. Stan’s is also made with an anti-freeze material that will allow it to stay liquid in temperatures as cold as -30 degrees Fahrenheit. Riders can get a quart of Stan’s sealant for $28 and will have liquid to spare after their conversion. 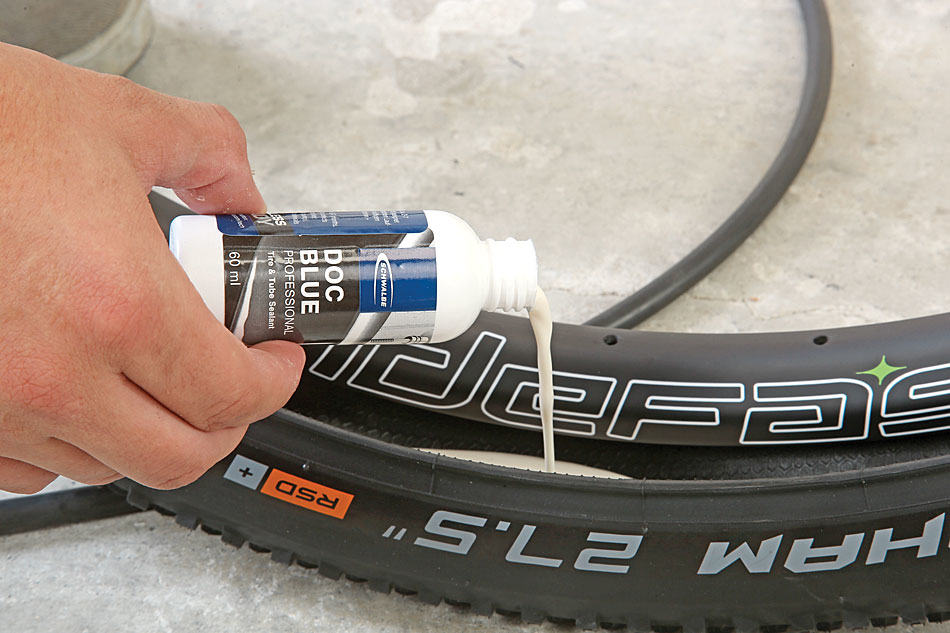 Single serving: Doc Blue sealant from Schwalbe comes in a small 2-ounce bottle to fill one tire. A larger bottle can help save money in the long run, however. 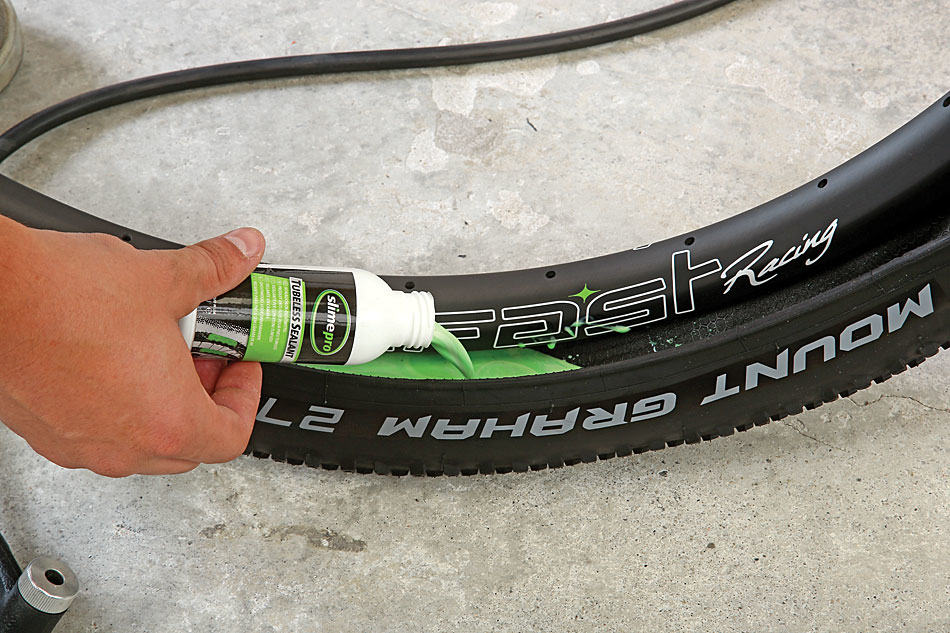 Pro tip: Some companies sell injectors to allow sealant to be inserted through a wheel’s valve stem. These work well when you don’t want to debead your tire, but they may clog your valve stem. We recommend simply pulling a small section of the bead off the rim and pouring your sealant directly into the tire. 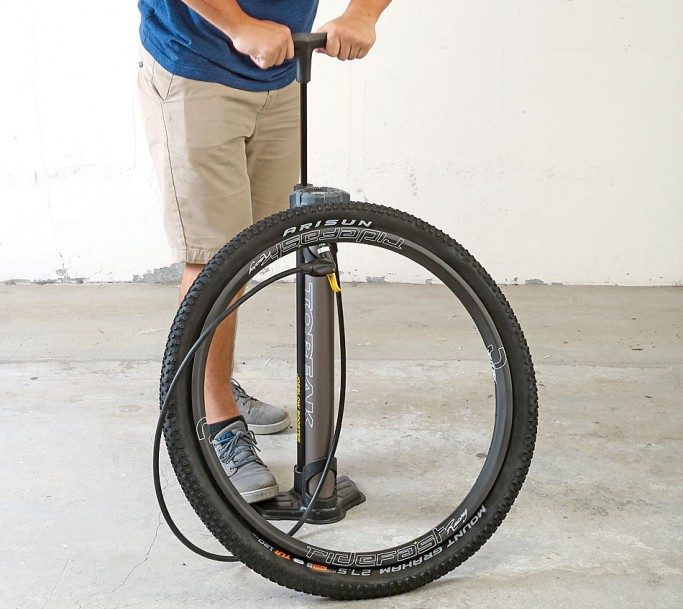 All by hand: We used our trusty Topeak Booster pump to seat our rims and tires. All eight tires made a loud, audible pop- ping sound that ensured us they were properly set up.

A bottle of Orange Seal tire sealant is generally the top recommendation from many bike-shop mechanics. The sealant tends to cost a little more than others ounce for ounce, with an 8-ounce bottle selling for around $13, but Orange Seal is known for its longevity and ability to quickly seal punctures. According to Orange Seal, its sealant can patch up a 1/4-inch hole and performs well in a variety of temperatures. The sealant is formulated from “nanites,” which are essentially a bunch of different-sized particles that work together to plug up punctures. 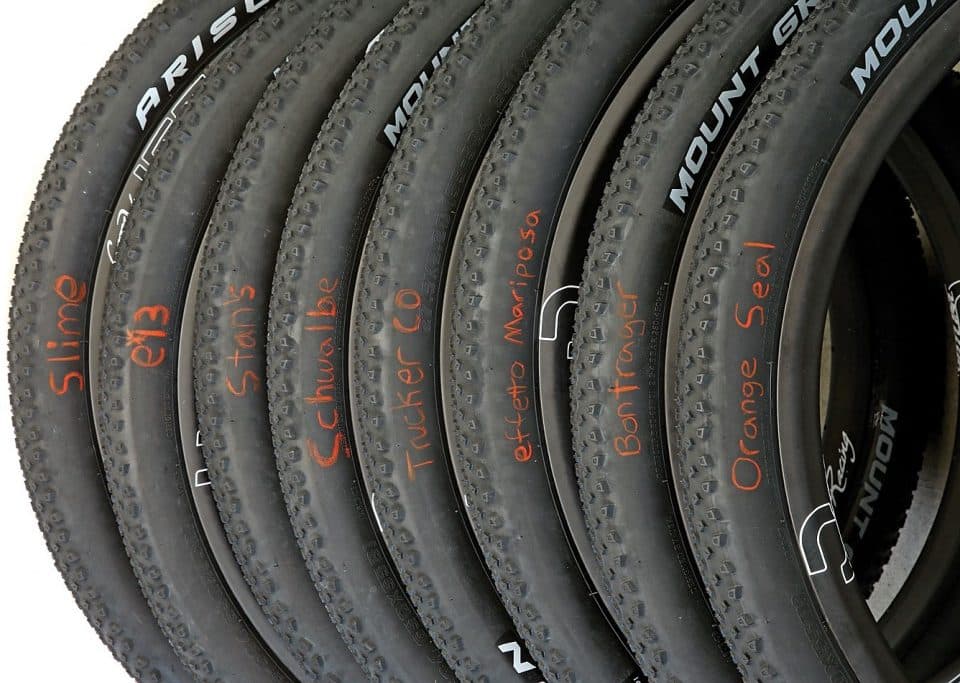 Labeled: We wrote the name of each sealant used in our tires to reduce confusion. 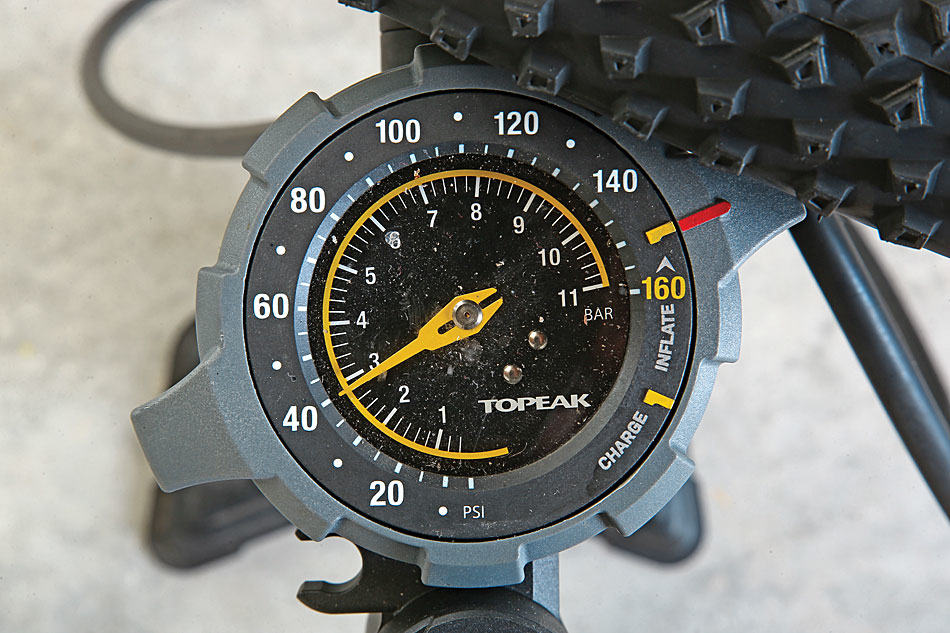 Pumped up: Our tires were all set up with the manufacturer’s recommended sealant amount, and then we pumped up the pressure to 40 psi. The wheels then sat for two weeks untouched.

Bontager’s TLR sealant is Trek Bicycle’s first choice for tire sealant. Bontager’s TLR is made in the USA with an ammonia-free formula and is claimed to repair puncture holes as big as 1/4-inch. It’s also claimed to work in a range of temperatures from -5 degrees Fahrenheit up to 120 degrees. Bontrager TLR sealant can be used in smaller quantities than other sealants and sells for $25 for a 32-ounce bottle. 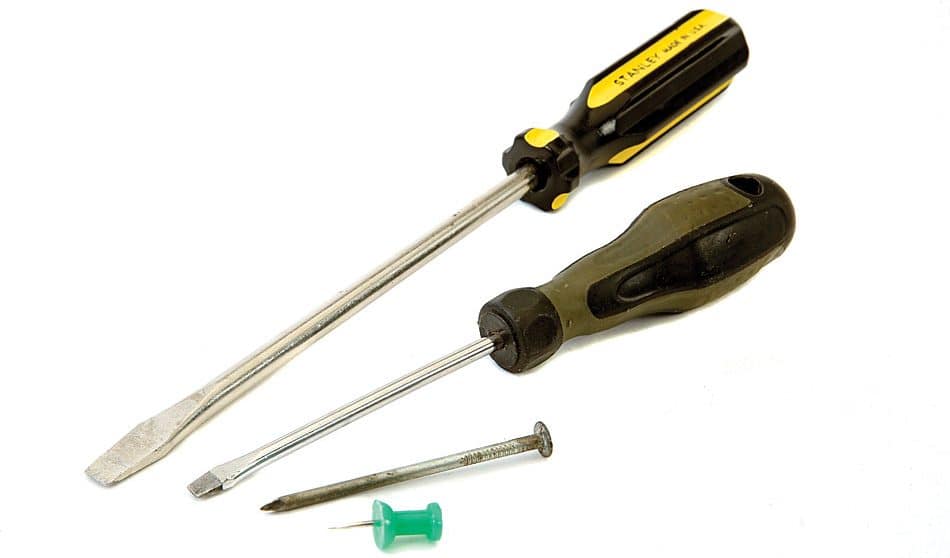 Weapons of mass tire destruction: Our test included the following sharp objects to puncture our tires. We started with a small thumbtack, then a nail, and then two different-sized screwdrivers. 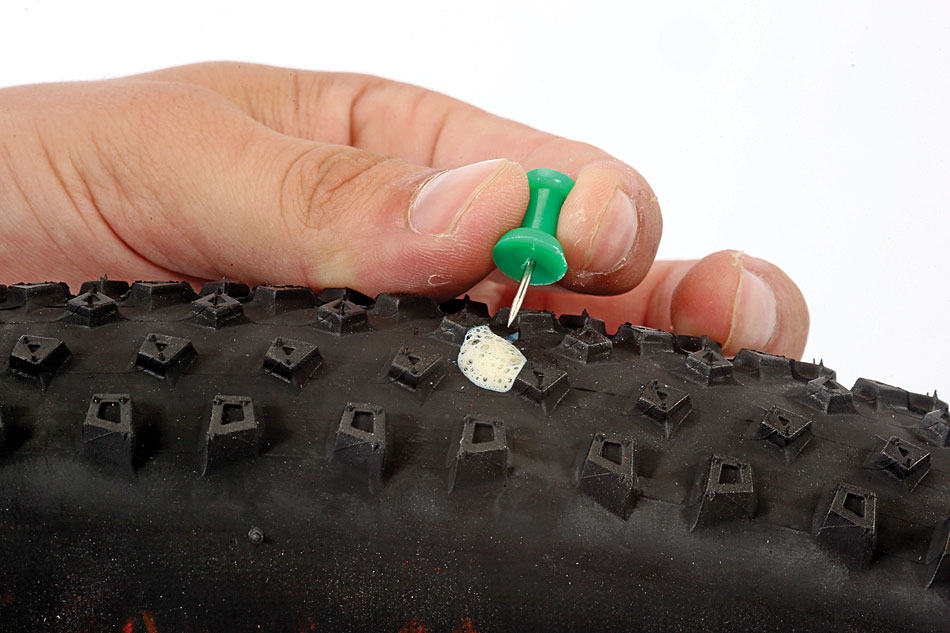 Just a prick: We used a small thumbtack to start off our testing process. All of the sealants successfully sealed this hole. 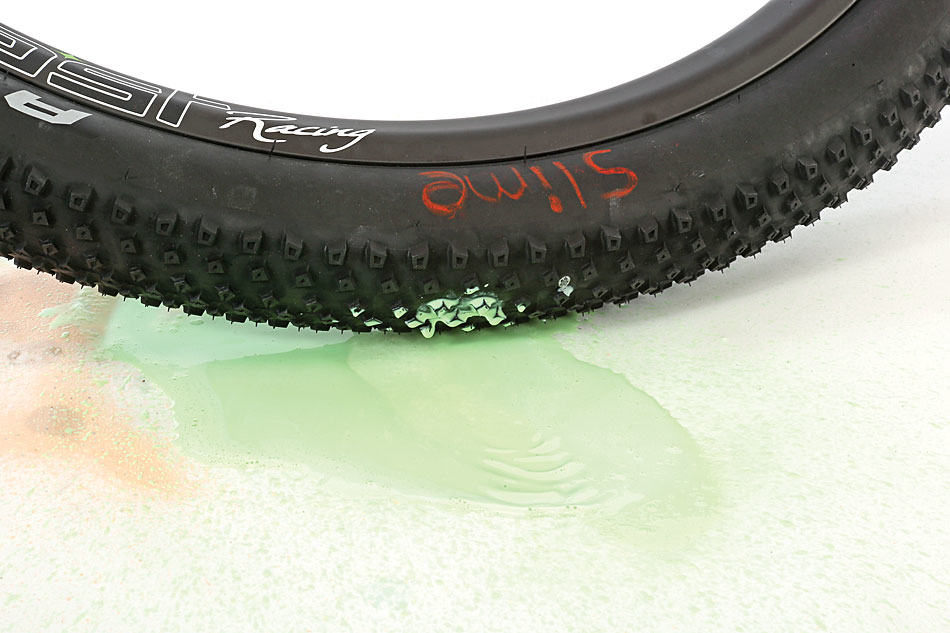 What a mess: All of the sealants we tested leaked a good amount; however, some seemed to spray out a lot more sealant than others.

Caffélatex tire sealant from Effetto Mariposa is a carefully formulated latex-based sealant with microscopic particles. The ultra-small particles clump together to seal punctures and are claimed to work well with thin-walled tires. Caffélatex was designed to turn into a foam during tire rotations to allow better coverage around the inside of the tire (as opposed to liquids that are slushed around the outer diameter due to centrifugal force). Caffélatex will then return to a liquid form after sitting for about 15 minutes. Effetto Mariposa sells a 1000-milliliter bottle (about 34 ounces) of Caffélatex for $30. 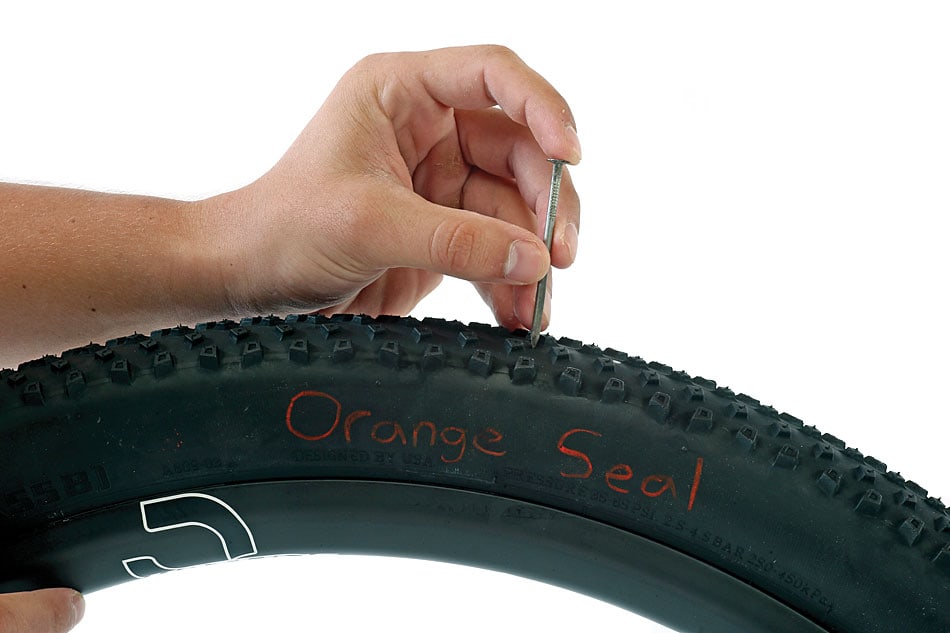 Stepping it up: The second object we used to puncture our tires was a nail. The nail holes managed to knock Bontrager and Effetto Mariposa out of the running.

TruckerCo’s Cream tire sealant is made in the USA from a latex base and is designed to work with any tubeless-ready rim and tire combination. The Formula is eco-friendly, and the product has a very enticing price. A 1-liter bottle (34 fluid ounces) sells for around $25 and comes with an injector syringe. TruckerCo Cream is claimed to have a higher concentration of solid particles over most other sealants, allowing it to seal better. TruckerCo also claims that its Cream sealant has a lower ph level, making it less harmful to metals and skin. 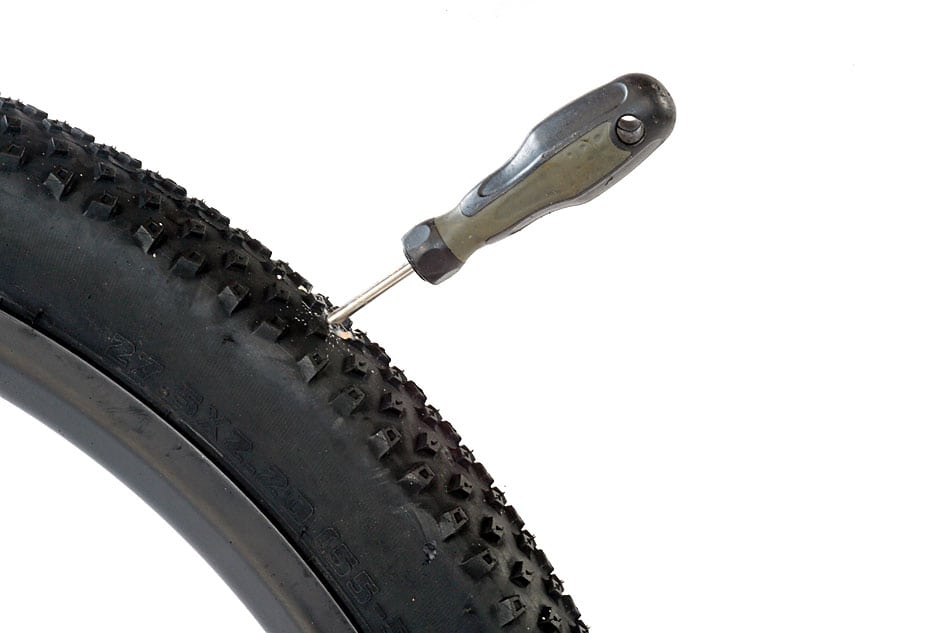 That’s not good: It’s fairly unlikely that a rider will find a screwdriver protruding from their tires, but we have personally seen sticks the size of a screwdriver stabbed through a tire, so we felt it was an appropriate test.

Back in 1989 Slime sealant was a revolutionary product designed to put an end to flat tires. This green gooey material known as Slime is synonymous with tire sealant. Slime is claimed to stay in liquid form for over six months and patch a hole 1/8-inch or 3 millimeters in diameter. Slime claims its sealant will work well with the freezing temperatures created by CO2 inflators, which could come in handy during a trail-side repair. Slime can be purchased in an 8-ounce bottle for $7.

Not a pretty sight: Every time we punctured a tire, some sealant would bubble out before sealing the hole.

Tire Plasma is E*thirteen’s special blend of tire sealant that claims to be cleaner, cheaper and just as effective as anything else on the market. According to E*thirteen, Tire Plasma can easily be cleaned up with water and won’t leave a conspicuous stain on the garage floor like other sealants. Tire Plasma uses a unique formula that cross-links its properties to help seal punctures. This sealant can be purchased in a single-serve pack of 120 milliliters, or roughly 4 ounces, for $5. 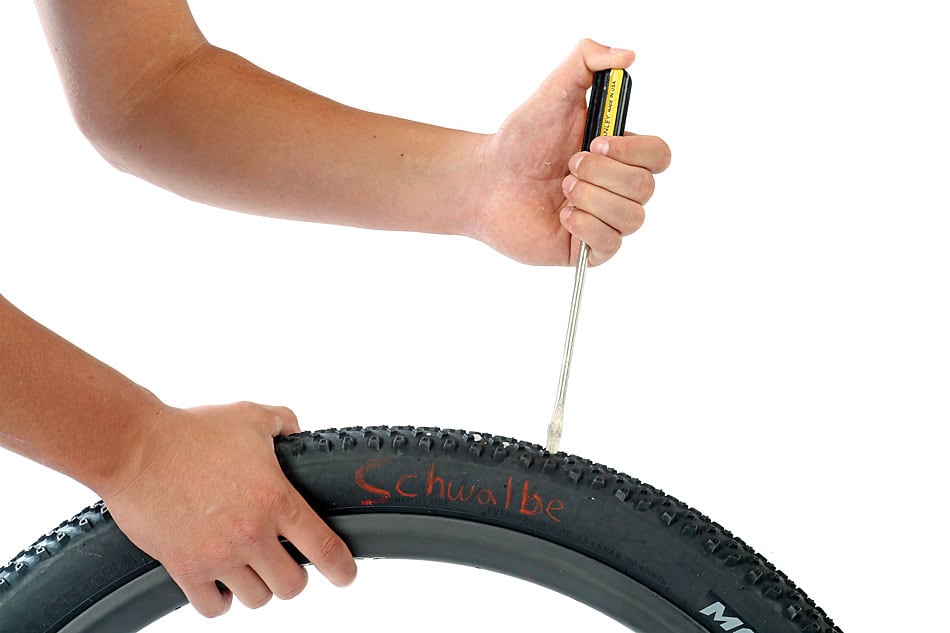 The big gun: The last object we used to puncture our tires was a large screwdriver. The massive hole created from screwdriver #2 pushed all of our sealants to failure; however, Orange Seal managed to hold on for the longest amount of time. Riders might be able to continue pumping up their tires and limp back home with Orange Seal sealant.

Doc Blue sealant from Schwalbe is produced by Stan’s and is intended for use with tubeless-ready systems or as added protection for your inner tubes. It’s claimed to be effective for two to seven months and sells in a 2-ounce bottle for $4. Schwalbe also offers the sealant in a 500-milliliter bottle (almost 17 ounces) for about $15.

Custom Conversion From A BMX Master

HOW TO GET ELECTRIC BIKE ACTION FOR FREE