The Swytch Kit transforms any bicycle into a premium quality eBike. The Kit consists of a compact and lightweight hub motor wheel (1.5kg) that replaces the original front wheel, and a palm-sized power pack (1.5kg) that fits to the handlebars (total weight 3kg). 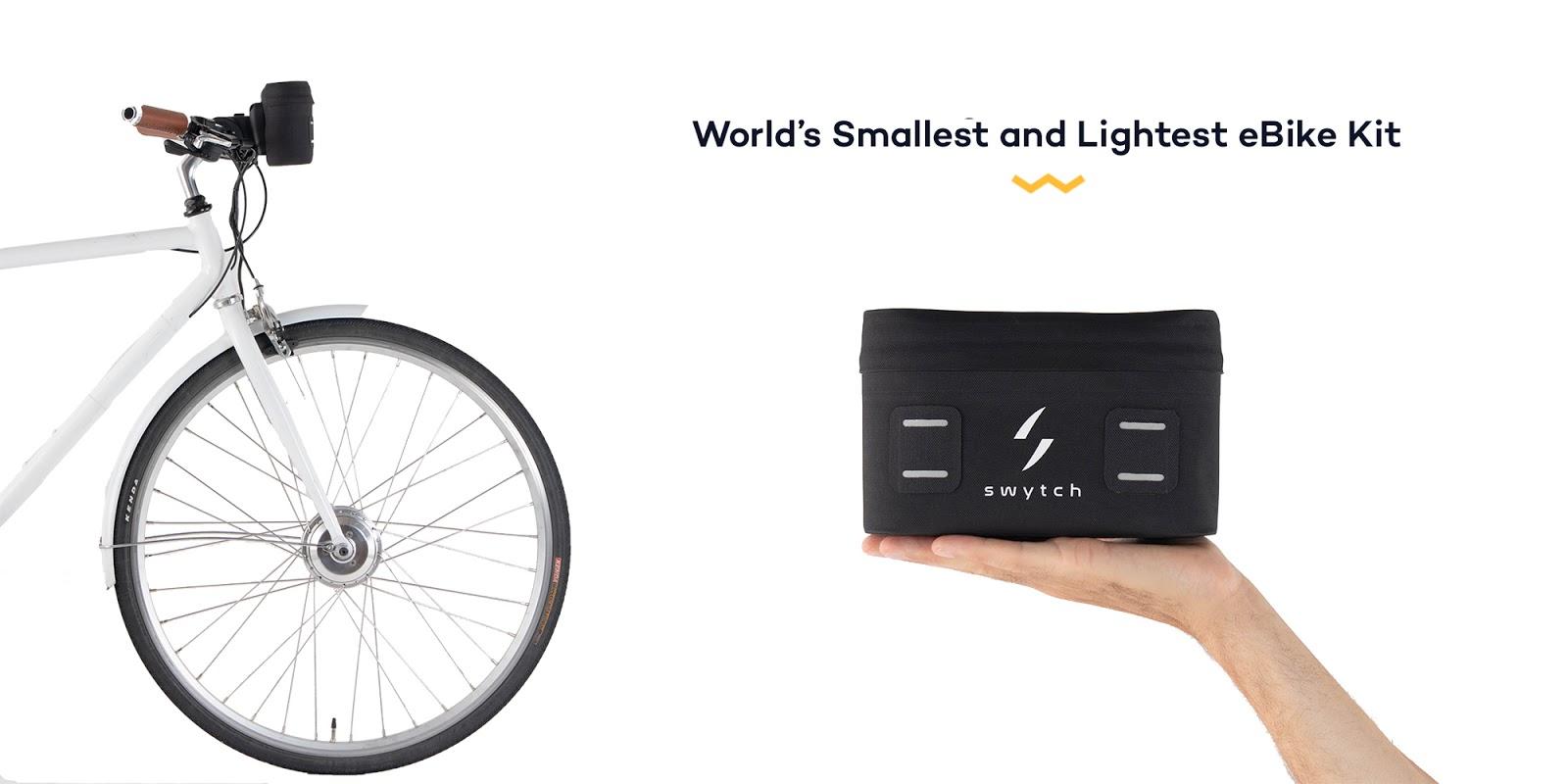 The Swytch Power Pack is not only the smallest and lightest in the world, but is also instantly removable allowing the user to “Swytch” instantly from regular bike, to eBike, and back again. The Swytch Kit provides 250W of power-assist for up to 50 km electric range, with a top speed of 15.5mph (EU) / 20mph (USA).

Two years ago Swytch Technology raised over $500k on Indiegogo for the original Swytch conversion kit, which was the world’s first universally compatible eBike kit. It was demonstrated to work on ANY bike, including a penny farthing. Compatible with any bike.

Today’s unveiling of the company’s latest eBike conversion technology reveals the Swytch kit which is now 50% lighter and 70% smaller than its original version, making it the smallest and lightest in the world.

Oliver Montague, CEO of Swytch Technology said;  “Our new Swytch Kit is a world-first. There is a huge and growing demand for eBikes, but many people are still put off by the significant cost (at least £2,000) for a good quality electric bike. In addition, most eBikes on the market are significantly heavier (by up to 8kg) than a regular bicycle, making them unwieldy and less popular than they could be.

“eBike conversion kits are the most sustainable way to access electric transport. Manufacturing a brand new complete eBike is extremely energy intensive and burns a lot of fossil fuels in the process. Instead we’re creating only the eBike parts you need and combining them with existing bicycles most people already have in their homes. Upcycling and upgrading your existing bike into an eBike saves the customers’ money and the planet’s resources.”

Speaking about the technology behind the Swytch Kit, CTO Dmitro Khroma said; “We set out to create the most compact eBike kit possible without compromising on power and performance. Every millimetre of each component was carefully considered. We’ve harnessed the best in class battery technology available today to develop the most energy dense power pack possible. We pushed the boundaries of power electronic technology to design an ultra-compact, lightweight motor controller that is not available anywhere else. The result is the smallest and lightest eBike system that is possible with today’s technology.

The Beast Is Back And Ready To Devour Anything