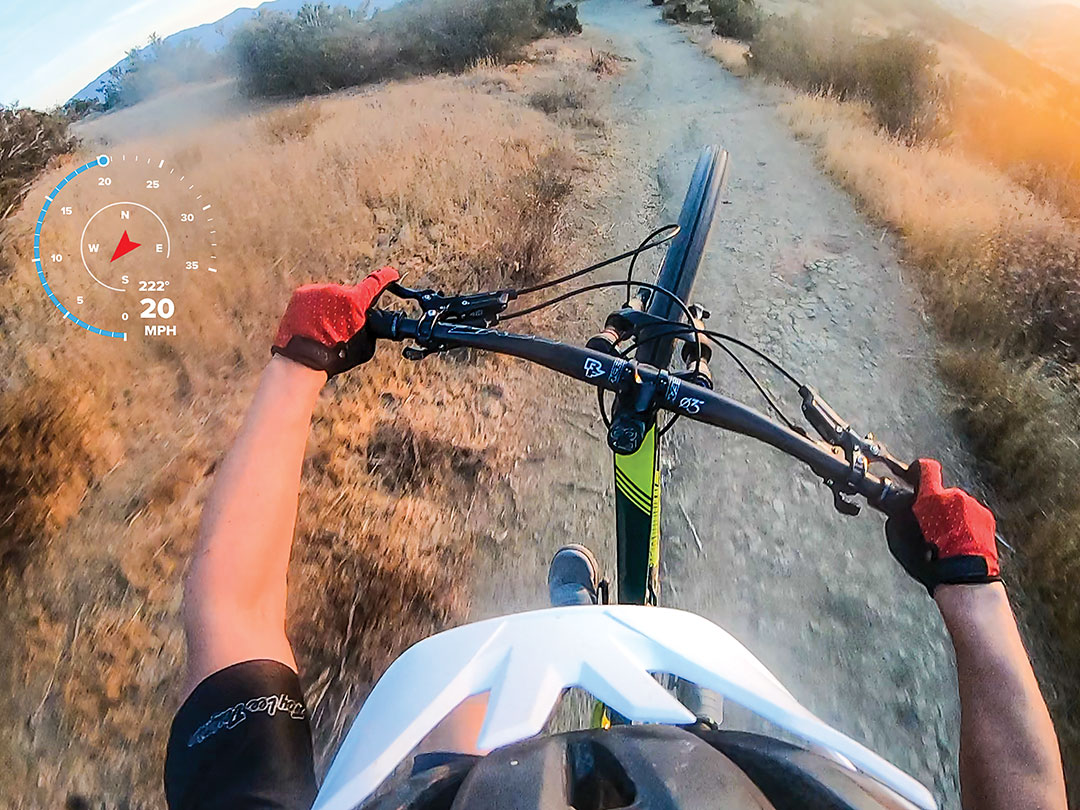 Have you ever wondered what it’s like to blast down a World Cup downhill course or navigate the massive drops that surround Red Bull Rampage? Well, thanks to action cameras, we can put ourselves in the driver’s seat all while watching these amazing feats from the safety of our living room couch. Point-of-view (POV) cameras have literally changed the way we view action sports, and they get more advanced every year. Cameras such as the GoPro Hero7 or Rylo’s 360 action cam allow riders of all levels to produce professional-level footage and send it directly to their favorite social media platforms. This month we tested two cameras to see which would come out on top—the camera synonymous with action sports cinematography or the newcomer battling back with a 360-degree field of view and a user-friendly smartphone app. 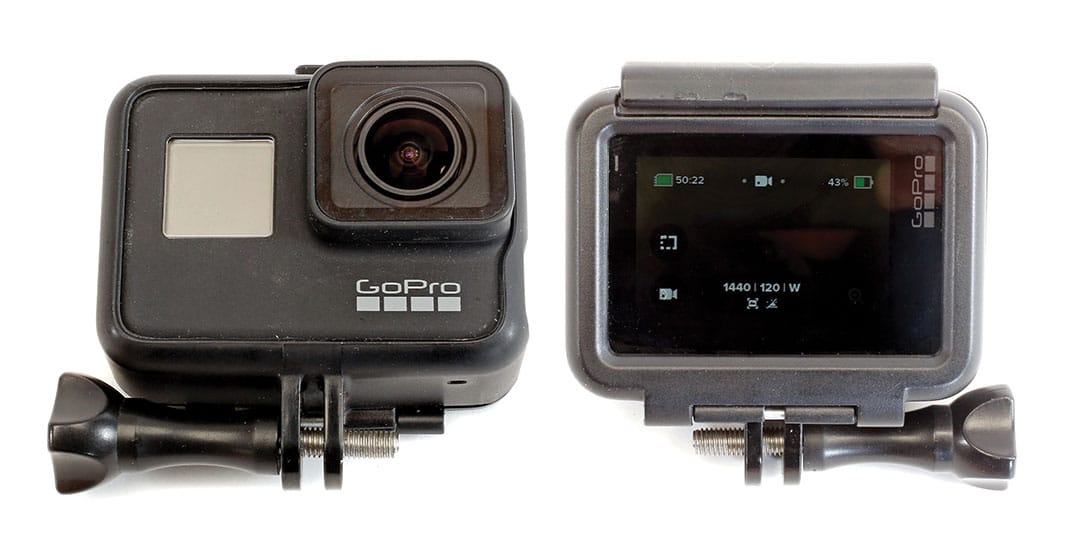 Battery life: Up to 60 minutes (removable only on Hero7 Black)

Waterproof: Yes, 33 ft. without a housing Field test results: GoPro was founded in 2002 by Nick Woodman, a passionate surfer and action sports enthusiast. Heading out on a surfing trip to Australia, Woodman knew he wanted to capture stunning up-close-and-personal photos of himself and his buddies surfing, so he rigged up a waterproof 35mm camera with a wrist strap. His creation soon grew into an international company that has sold over 26 million GoPro cameras in more than 100 countries. The Hero7 is the newest addition to GoPro’s lineup, with the Black Edition being the top-of-the-line model. The Silver and White Editions are available for $300 and $200 respectively.

The EBA crew used a variety of mounts—from a chest strap to a helmet mount—and even mounted the Hero7 to our bikes. An LCD touchscreen located on the back of the camera, similar to the ones used on previous Hero models, makes lining up shots a bit easier; however, the camera can also be linked to your smartphone to show a live view when the back of the camera is not visible. Additionally, the Hero7 Black can be operated with voice commands. Switching through settings is quick and easy. The camera uses a small speaker ans a small light to notify you that the camera is running, or you can look at either screen located on the front or back of the camera. The GoPro offers a more rugged design than the Rylo and has less chance of being damaged due to only having one lens. That said, the single lens is limiting, as the shot has to be lined up perfectly or you run the risk of missing the best action. Overall, the Hero7 Black offers great video quality with superior image color and the ability to more easily handle sun flares. HyperSmooth is a new technology from GoPro that’s designed to offer gimbal-like stabilization; however, it’s only offered in Hero7 Black models. On the trails, you notice the HyperSmooth feature immediately. It provides a pleasing video free of shakes and rattles. Sound quality seems to be superior on the Hero7 Black over the Rylo, but don’t count out the Rylo just yet, as the little 360 camera has a lot to offer.

Battery Life: Up to 60 minutes (removable) 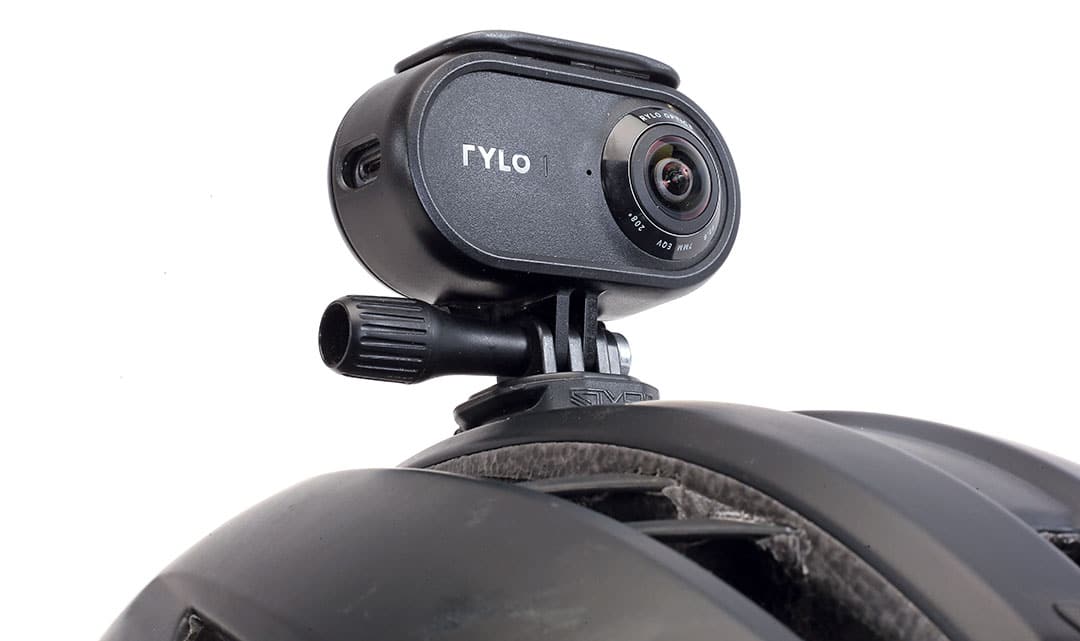 Field test results: The founders of Rylo include engineers and developers from Apple and Instagram who helped create photo and video apps like iPhoto and iMovie, as well as technology for video stabilization and other advances we take for granted on a daily basis.

Rylo’s 360 camera was designed to shoot first and ask questions later. Filming a full 360-degree field of view, it’s almost impossible to miss your shot with the Rylo. We tested this camera using the same mounting systems we used with the GoPro and quickly noticed the Rylo’s stabilization was superior to the GoPro’s HyperSmooth technology. This was mostly a feature of the Rylo’s ability to auto-level the horizon. The Rylo also offers a cool feature that edits out the pole it’s mounted to, making it look like the camera is floating in midair. Our testers, however, noticed the camera’s software would often try to edit out our handlebars, giving them a blurry look. As far as editing video content, Rylo by far has the better app of the two. Simply plug the Rylo into your phone using the provided cable and free app. Once in the app, the 360 video can be seen and exported in a large 360 file or an easier-to-share and view-flat HD file. The editing software is user-friendly and allows you to tell the camera where to look or what to follow, such as another rider. Not only does this allow you to re-frame your shot for the perfect view, it also gives a neat perspective when going around turns or catching a buddy’s crash that happened behind you. 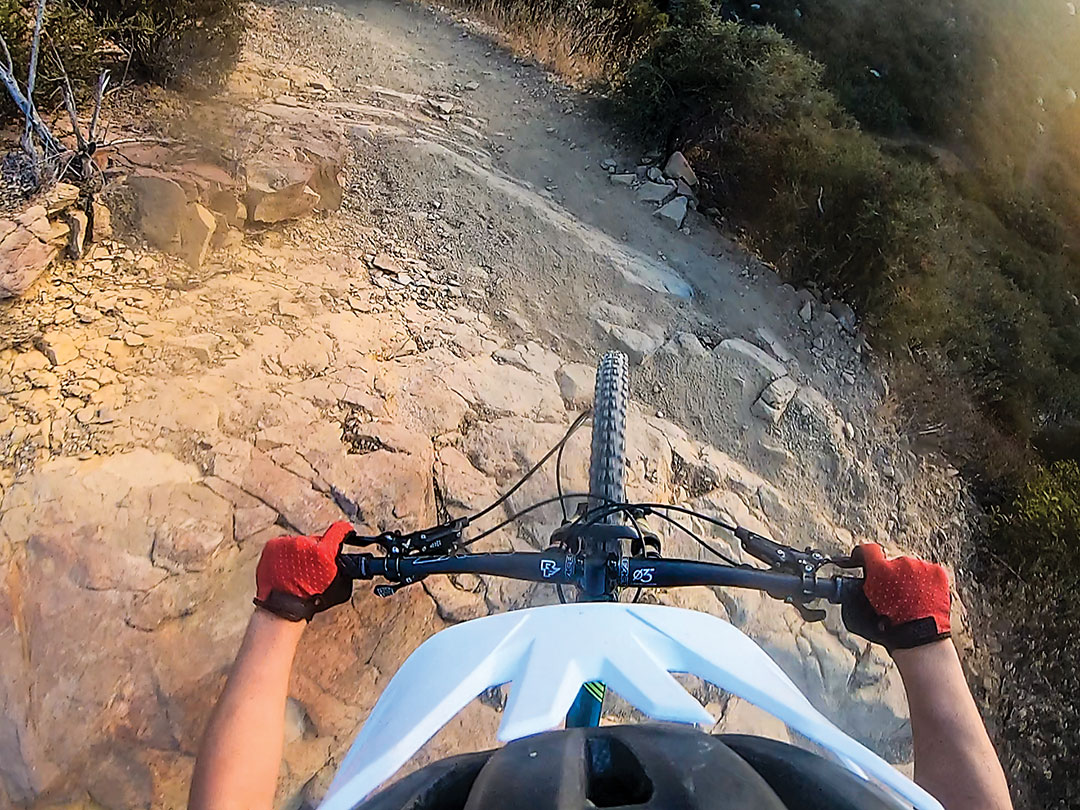 As far as being a user-friendly camera that never misses a shot, the Rylo takes the gold. That said, the Hero7 Black offers unmatched video quality and sound, providing professional video producers and athletes with top-notch content. Rylo’s 360 camera offers more user-friendly software and the ability to directly plug the camera into your phone for quick and easy data transfers. The Rylo never misses a shot and even adds unique angles, all while shooting the same run. Since the Rylo is $100 more, riders may want to save money and reap the benefits of higher image quality from GoPro’s Hero7. A rider who is less concerned about big-screen quality will find the Rylo is the perfect tool for filming fun rides and adventures with family or friends. If we could only have one camera, we would lean towards the Rylo for its 360-degree capability, but we had zero complaints with the Hero7 other than the times we pointed it too high or too low and missed the best action. Regardless, you can’t go wrong with either camera and will find these new and advanced action cameras are better in every way than any POV camera from just a few years ago. Now, choose your weapon and get out and film some rad content. Oh, and don’t forget to tag #ebaction in all of your favorite shots.

How to Land a Job in the Bike Industry

Got Kona On Your Mind?

Going After the World Record