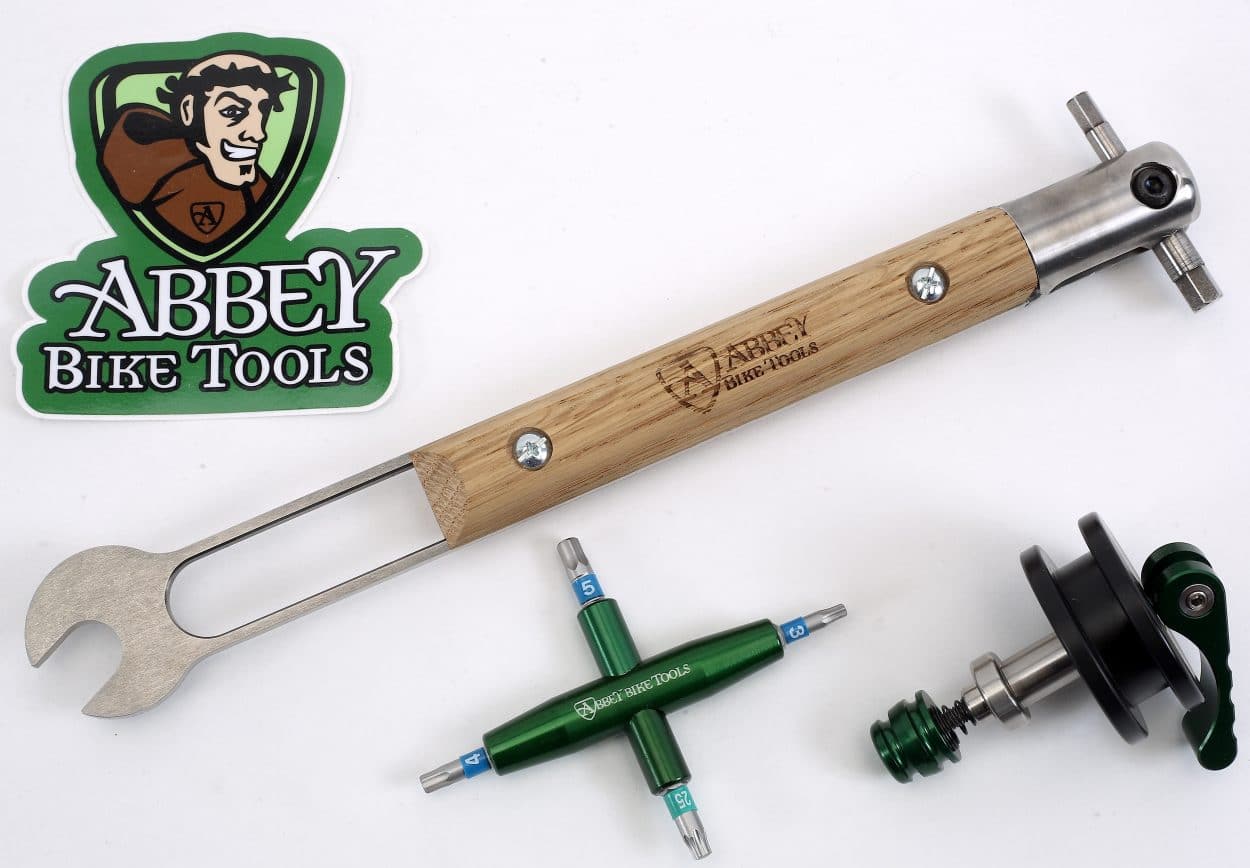 There are two kinds of people who are interested in Abbey Bike Tools. The first is the guy who makes a living working on bicycles and holds a high-enough standard in his craft to only want the highest-quality and most prestigious tools on the market. The second is the passionate bicycle enthusiast who only wants the best for everything he does. We aren’t talking about the one-upper guy here. We are talking about the guy who says, “If I am going to do it, I am going to do it right!” There is a comfort of going into a garage and seeing a huge Snap-On toolbox owned by the greasyhand (and hair) mechanic who is going to work on your car. Abbey Bike Tools could be the bicycle tool equivalent of Snap-On. But the fact is, Snap-On isn’t making hand-made, CNC-machined and individually welded pieces of art. That is what puts Abbey in a class by themselves. 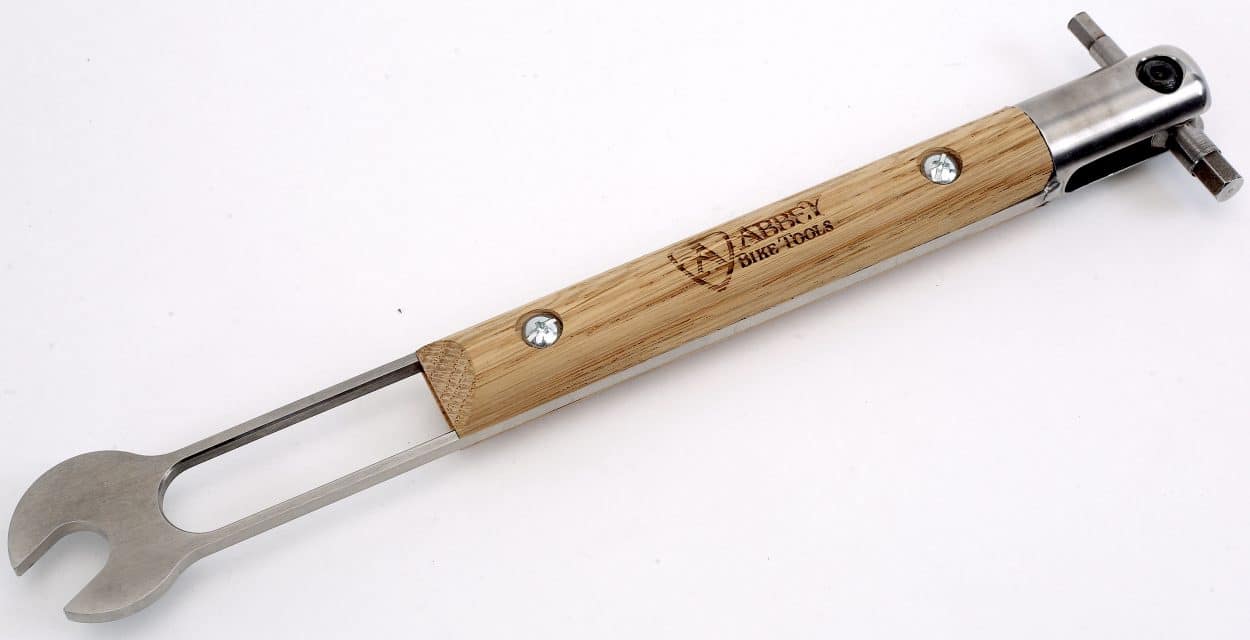 Abbey Bike Tools was unintentionally created when Jason Quade, a USA ProTour mechanic was asked by Jeff Crombie to create a custom cassette tool for him. And as simple as that, the Crombie tool became the unnamed brand’s anchor. Although created in the road bike market, nearly every component since the inception of mountain biking has crossed directly over from the road world. That being said, mountain bikes require 10 times more maintenance and repairs than road bikes, making Abbey Bike Tools even more desirable for the dirty discipline of cycling. Abbey Bike Tools are 100 percent American-made in Bend, Oregon. The staff is small, comprised of three people, including Jason and a dog who actually dictates the schedule. Parts are machined and anodized off-site, but the crew at Abbey pride themselves on their American-made branding.

The Wash Buddy: The Wash Buddy clamps on your rear dropout and allows you to spin the crank and shift gears while it holds the chain accurately in place. With the rear wheel of the bike, you can do proper drivetrain maintenance and wash your bike pro status. The quick release is aluminum, the spindle is stainless steel and the pulley is made from Delrin. Every part is extremely solvent resistant. The pulleys are also available individually for thru-axle bikes and simply slide over the factory rear axle. MSRP is $55 for the Wash Buddy and $15 for the stand-alone thru-axle pulley. 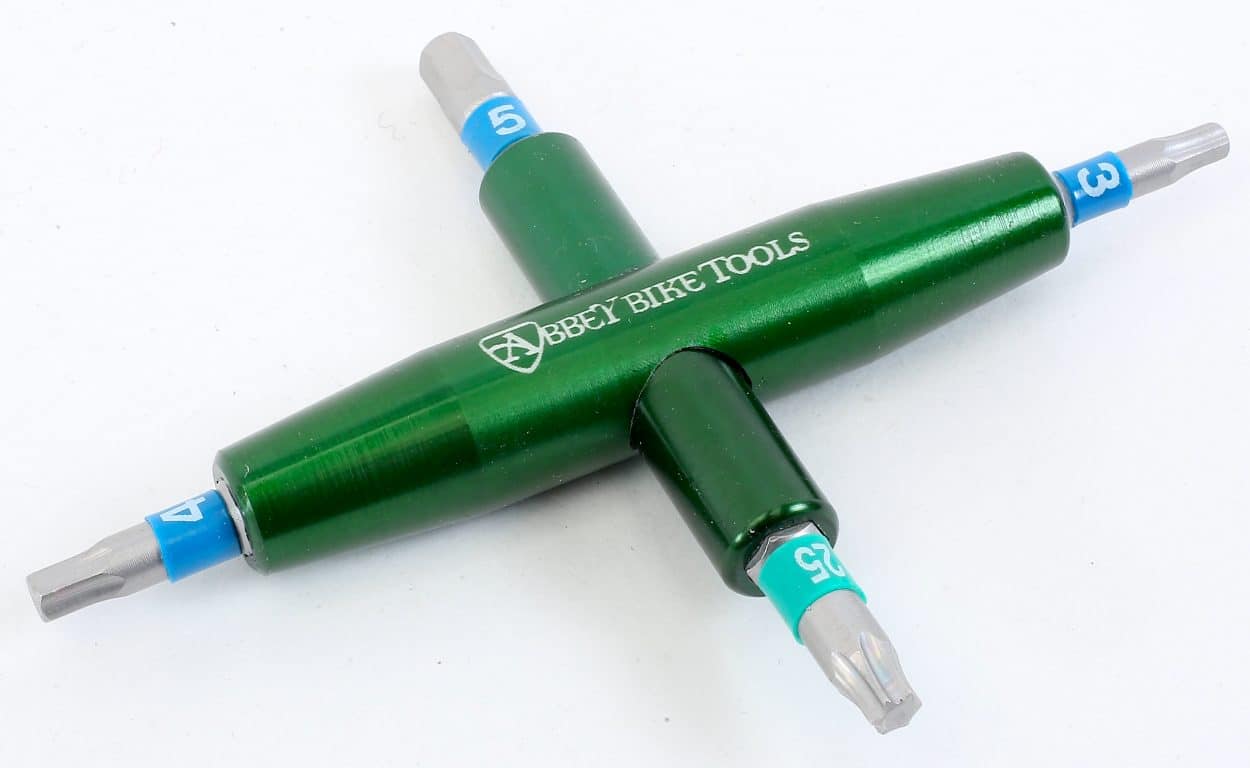 Four-way multi-tool: The ergonomics and precision of the Abbey Bike Tools fourway precision multi-tool is unmatched, and the Emerald Green is unmistakable. Even though it is a simple utility tool, Abbey prides themselves on the tight tolerances they manufacture all their tools with. The multi-tool has an aluminum handle with four stainless steel bits that come in five different stock configurations using hex, slotted, Phillips or Torx bits. They are also available to order in your own custom configuration. With proper use, the bits will not round out or strip out your fasteners and they’ll never rust. There is a good chance you’ll want more than one of these multitools in your possession. 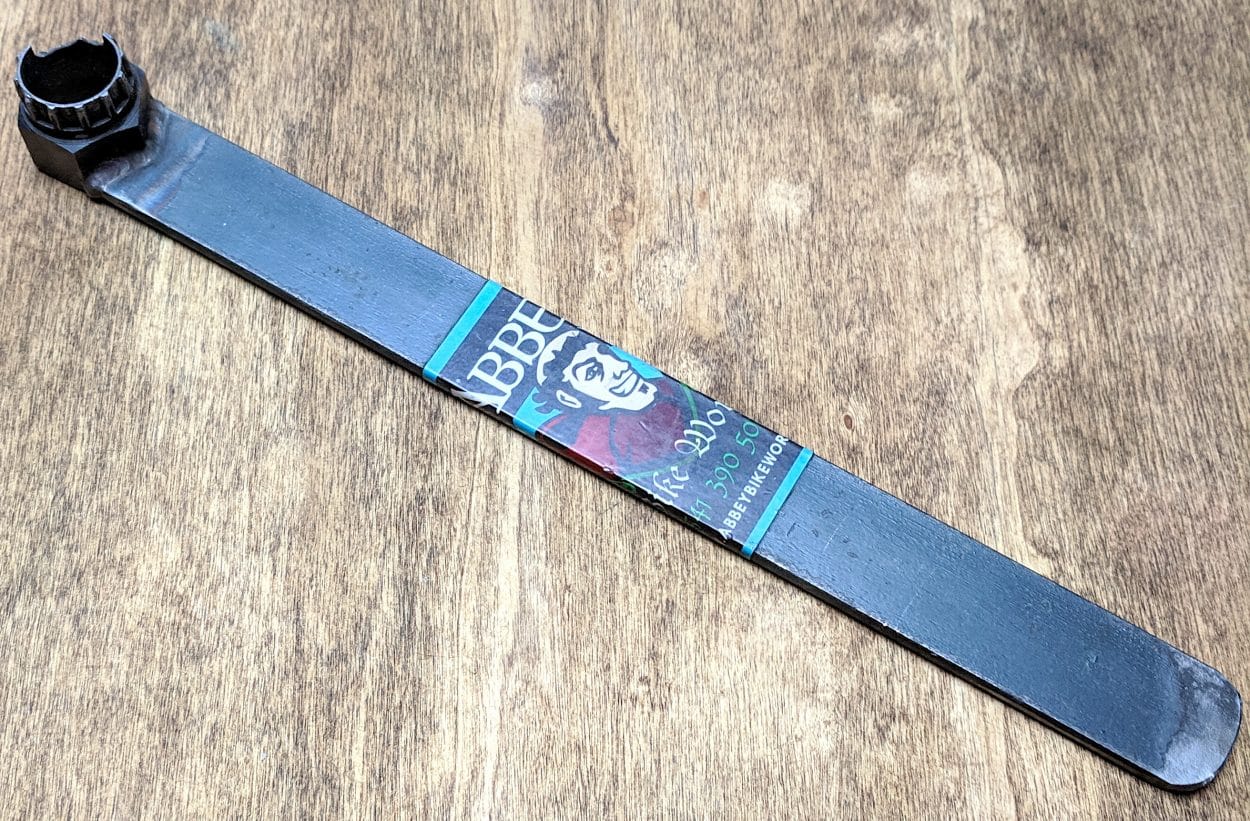 BBQ pedal wrench: Besides a multitool, the next most common tool would be a pedal wrench. Abbey takes this simple utility tool to the next level. Machined from tool steel, the 15mm open end is surrounded by a white oak handle. On the opposite side you’ll find 6mm and 8mm hex bits on a swivel that are made from hardened stainless steel, the same material as the original Crombie tool that put Abbey on the proverbial map. It is handy with all of today’s pedal options to reach for one tool that will install or remove any pedal thrown your way.

BIMOTAL ELEVATE There is, of course, no shortage of interesting innovations to be found in the world of e-bikes.…