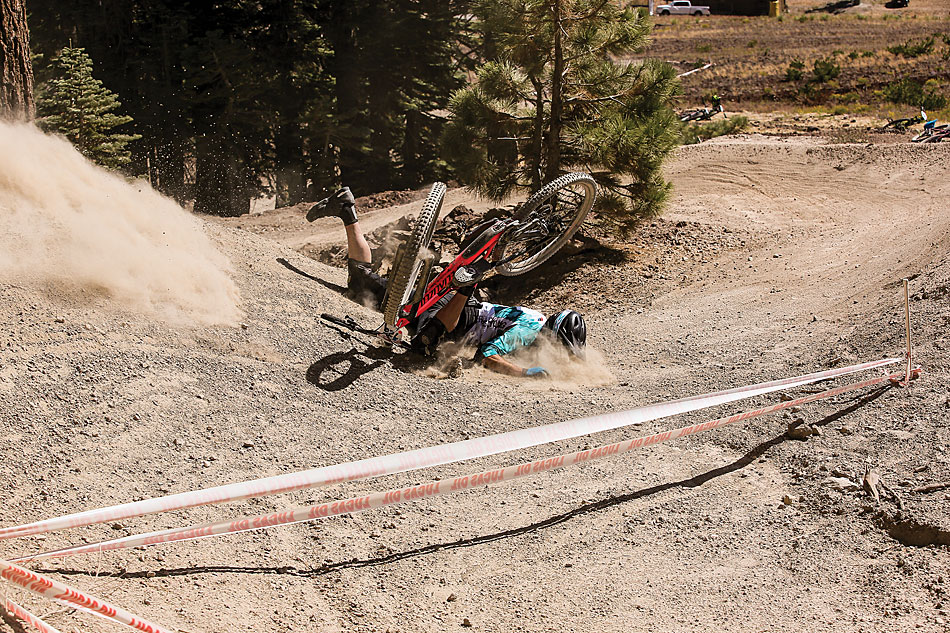 Bike parts are lighter and offer better performance than ever. The gains are largely due to improvements in material technology, such as switching from metal to carbon fiber parts. These lighter and “better” parts come with a bit of uncertainty, though. It has long been rumored that carbon parts can suddenly and unexpectedly fail if they suffer even a small scratch in a crash. We wanted to know if this urban legend is actually true and how much damage truly makes a carbon part dangerous. To find out, we sat down with the designers at one of our favorite carbon manufacturers, Renthal. This is what they had to say.

RBA: Components like bars, stems, seatpost rails or other parts can easily be damaged in a crash. Are carbon parts more susceptible to failure than alloy ones if they suffer damage?

Renthal: Yes and no. Yes, as carbon is obviously a softer material than aluminum, so damage can occur due to direct contact with rocks or the ground more easily. No, as aluminum has a grain structure that can propagate cracks if surface damage occurs. Carbon fiber doesn’t exhibit this type of crack propagation. We fatigue-tested aluminum and carbon bars with very similar surface damage. The fatigue life of the aluminum handlebar was reduced due to surface damage, but the carbon bar was not affected. That said, we still recommend replacing any carbon or aluminum product that has been damaged.

RBA: How should a rider diagnose whether his carbon part’s damage is just superficial or if it could be structural? Is there a rule of thumb here? For example, with a helmet, it should be replaced after one impact, even if it doesn’t look like there’s damage. Is there anything like that with carbon parts?

Renthal: We advise that any product, carbon or aluminum, be replaced in the event of an accident. Once you have come off the bike, it’s hard to tell what forces may have gone through the handlebar as the bike cartwheeled down the trail. Particularly with carbon fiber, it may not be evident that there is structural damage. With aluminum, a bent handlebar is clear evidence that the structure has been compromised. Carbon fiber is much less ductile, and although the bar may look fine, the next big impact, like a heavy landing, may break the bar if the strength has been compromised in a previous impact. This could result in injury, hence our advice to change the bar following an accident.

RBA: What should riders look for when inspecting their carbon components? Are there signs of stress that can appear, even without damage from an impact?

Renthal: There can be very obvious signs, like a crack or a deformed section. But, this isn’t always the case, as the issue could be within the material’s layers, not at the surface.

RBA: Is there any way to repair a carbon part? Or, is it best to simply replace? Renthal: There are companies offering carbon fiber repair. We would recommend replacing a Renthal carbon fiber handlebar rather than repairing it. We stringently test all of our handlebars, but there are no guarantees with the altered structure of a repaired handlebar. The consequences of a failure are just too high to risk it.

RBA: Have you ever seen an accident caused by a failed carbon part?

Renthal: There have been a few high-profile incidents when a product has been pushed beyond its limits and has broken. Greg Minnaar’s V10 getting broken clean in half at the Val di Sole World Cup last year is one example. But, an aluminum frame wouldn’t have come out of that crash in usable condition. The perception is that if an aluminum product is bent in a crash, it’s the fault of the crash; if the same accident results in a carbon fiber product snapping, the product is often blamed. Depending on the grade of aluminum and carbon fiber used, both materials can have similar ultimate strength, but the differing failure modes change the perception of the cause of breakage.

RBA: Are there any big or aggressive riders who should avoid carbon parts? Or, are they every bit as durable as their aluminum counterparts?

Renthal: Talking only about Renthal products, we don’t put a weight limit on any carbon fiber product. All products are built to endure any normal riding situation any rider will put them in. When talking about strength, the level we build into a handlebar is to give increased crash durability where the highest forces are experienced.

RBA: Why is using a torque wrench so important? And why do the downhill parts have the same torque ratings as the cross-country ones? Shouldn’t those bolts be tighter for the rigors of DH?

Renthal: Our data acquisition has shown that forces exerted on a handlebar in downhill and in hard trail riding or enduro racing are very similar. The higher speeds and bigger features of downhill racing are offset by longer-travel suspension. Athletes racing the Enduro World Series are pushing their equipment just as hard as those racing World Cup downhill. So, the torque spec for either should be the same.

RBA: Not all carbon parts are made the same, and the internet is loaded with stories of counterfeit parts hitting the market. Is there any good way to tell a genuine carbon part from a fake one?

Renthal: The best advice here is to buy from your trusted local bike shop. Or, if you shop online, from a well-known and reputable outlet. Always ensure that the handlebar is supplied in original, aftermarket packaging.